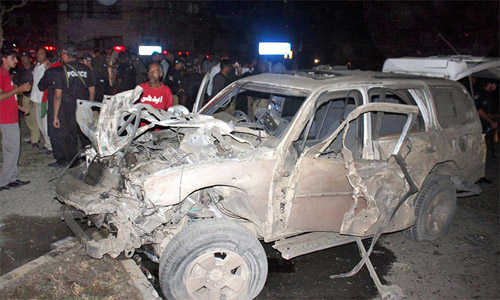 The attack targeted a convoy of SSP South Farooq Awan in DHA Phase 4. The blast was heard far and wide and a large plume of smoke was visible as well.

The blast caused a suspension of electricity supply in the vicinity. The vehicle of the senior police officer was completely destroyed in the attack, whereas another police mobile van escorting him was also badly damaged. “Police has cordoned off the area and is collecting evidence from the blast site,” said IG Sindh Ghulam Haider Jamali. He said that the attack, in which two people were killed and six others injured, did not appear to have been carried out by a suicide bomber. The IG added that the bomb appeared to have been planted in a Suzuki pickup van which was remotely detonated. Sections of the local media reported that banned militant group Jundallah claimed the attack on Awan.[contentblock id=2 img=adsense.png]

The claim could not yet be confirmed. Moreover, the CID police’s counter-terror unit chief, Raja Umer Khattab, said he believed that Jundallah might be involved in the attack. He had said earlier the murder of Ali Akbar Kumaili, son of prominent Shia scholar and former Senator Allama Abbas Kumaili and a grenade attack on 15-Madadgar police at Nursery on Sharae Faisal in Karachi were also reportedly claimed by Jundullah.

Khattab, who had worked on high-profile terror cases, said Jundallah had been ‘reactivated’ after a gap of about one-and-a-half years in the city. Seemi Jamali, the spokesperson at Karachi’s Jinnah Post Graduate Medical Centre, confirmed to AFP that two people died in the attack.

She added two women were among the injured. Speaking to the media, Additional IG Sindh Ghulam Qadir Thebo said that the attacker was apparently either riding a motorcycle or on foot. SSP Farooq Awan also suffered minor wounds in the attack and was shifted to a private hospital. -dawn