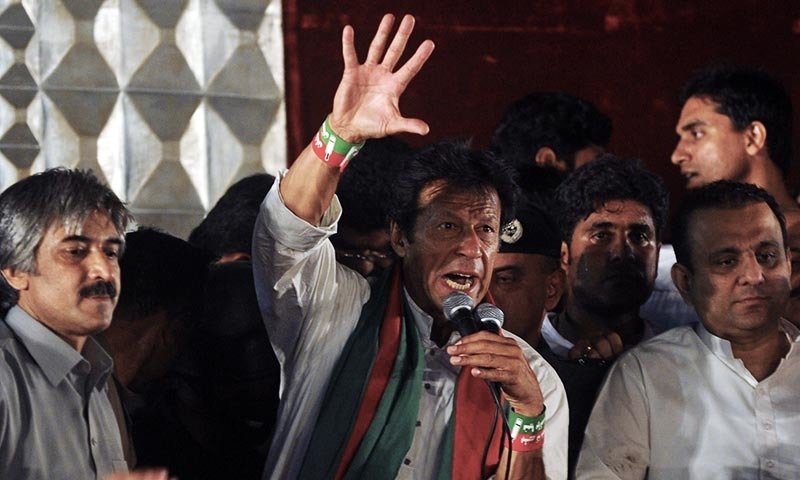 Pakistan Tehreek-i-Insaf Chairman Imran Khan came up with a unique idea on Sunday, suggesting that representatives from the Inter-Services Intelligence and Military Intelligence should sit on a Supreme Court commission to investigate alleged riggings in last year’s general elections.

The head of the commission should be decided by the government and the PTI, he declared. The commission should be formed by Nov 30 and it should finalise its findings within six weeks. Addressing a large public meeting on the lawns of Khawaja Fareed College in Rahimyar Khan, the PTI chief said: “If the rigging is proved by the commission, Nawaz Sharif should resign and new elections be held under a free and fair election commission.” He said his party did not trust former chief justice Tassaduq Hussain Jillani because he was not impartial and that was why the PTI had suggested the name of retired Justice Nasir Aslam Zahid for the post of chief election commissioner. Four other members of the ECP should also resign, he demanded.

He said the PTI had struggled for the independence of judiciary which was now independent but not impartial. Mr Khan said he did not want to be prime minister like Nawaz Sharif and would never ask for funds from the Americans. Steel Mills, PIA, Utility Stores Corporation and Nandipur power project had suffered losses of billions of rupees, but Hanif Abbasi who was involved in the Ephedrine case was sitting on Rs50 million funds, he added. He said an ordinary farmer was paying extra GST, but wealthy people were not paying taxes. He accused Nawaz Sharif, Shahbaz Sharif and Hamza Shahbaz of misusing public money and said they used three different jets to go to Lahore from Islamabad.

Mr Khan said electricity tariff would decline by 50 per cent if corruption and theft were controlled. He said Nawaz Sharif and Asif Ali Zardari should declare their assets and also taxes paid by them. He claimed that 1970 elections were the only ones in the country’s history which were free from rigging. The country needs free and fair elections. “These two parties (PML-N and PPP) have been ruling the country for 30 years and they always come to power through rigging,” he said. The government was planning to send Mubasher Lucman to jail, he said, adding that this would be a big loss for free media. Pemra, Nepra and the ECP are under control of the government and this is misuse of power.

The PTI chief asked youths, women, labourers, farmers, doctors, clerks and lawyers to reach Islamabad on Nov 30 to take part in the campaign for bringing about change. “We have been holding a peaceful protest sit-in in Islamabad for three months. After Nov 30, we will announce our new strategy and the PML-N will not be able to run the government easily,” he said. He claimed that the recent reduction in prices of petroleum products was a result of his party’s sit-in. PTI Vice Chairman Shah Mehmood Qureshi criticised Finance Minister Ishaq Dar for getting a new loan of Rs1.1 billion from the IMF. He said the PTI was going to Larkana to bring about change and there was no need to get a “visa from Zardari”. Earlier, police closed several entry points of the city by placing containers on Dari Sanghi Bridge, Pathanistan Chowk and Abbasia Town Bridge.

People faced difficulty and their routine activities were affected. There were no proper security arrangements for the participants of the meeting, except for the main stage which was checked by the DCO and DPO several times. Four walkthrough gates were installed at the main entrance, but there was no arrangement for frisking the participants. A number of PTI workers and supporters crossed the fence and climbed walls to enter the ground. The party’s district leaders did not provide volunteers to protect the venue. -dawn