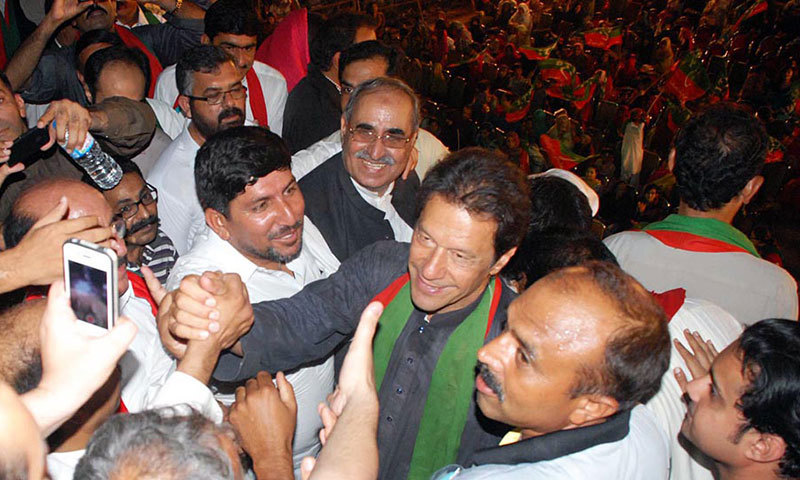 The PTI issued yet another warning to the government on Tuesday, saying it would resume its agitation if the ruling party failed to meet its demand for a judicial commission to independently investigate rigging allegations in the last general elections.

Flanked by his party’s top leaders, PTI Chairman Imran Khan told reporters at his Bani Gala residence: “I request the government once again to constitute an empowered judicial commission. Otherwise, I will be left with no other option but to resume my protest.” But in the same breath he added: “If the government believes that it can use the Peshawar school tragedy to evade our demand for the judicial commission, they are mistaken.” The PTI had displayed flexibility by supporting the establishment of military courts despite serious reservations within the party, and now it is the government’s turn to reciprocate, he maintained. “On Jan 18, PTI will gather on D-Chowk to commemorate the services of party workers who lost their lives and others who braved all sorts of adversity during the 126-day dharna and rallies countywide,” he said.

“The government has until then to formulate the proposed judicial commission. Otherwise, I will announce a future course of action on Jan 18,” Mr Khan said. The presser at his scenic residence followed Mr Khan’s return from a short trip to London and before speaking to the media, he also chaired a meeting of the party’s core committee. Responding to a question, Mr Khan clarified that the kind of judicial commission the government had agreed to constitute wasn’t acceptable to the PTI. He also challenged certain facts about his constituency, NA-122 in Lahore, where an election tribunal had ordered an audit of the results. Responding to what he called “government propaganda” about the outcome of yet-to-be-officially-released report, Mr Khan said: “According to our information, a massive 30,000 votes that were cast in NA-122 have been declared bogus.”

According to him, 30,000 votes did not bear stamps or signature of the presiding officers on the counterfoil; votes from 100 polling stations did not contain Form 14 and 15 in the ballot bags; and ballot papers of different colours were found in 25 polling stations. Ballot papers with overlapping serial numbers have also been found.

Responding swiftly to the PTI chief’s assertions, Information Minister Pervaiz Rashid said that Mr Khan had made misstatements about the ongoing investigation in the Lahore constituency. “In fact, the probe in NA-122 has proved that Mr Khan was defeated with evidence that he and his party should accept.” He also called the PTI chief’s press conference “an effort to spoil the ongoing national consensus against terrorism”. -dawn