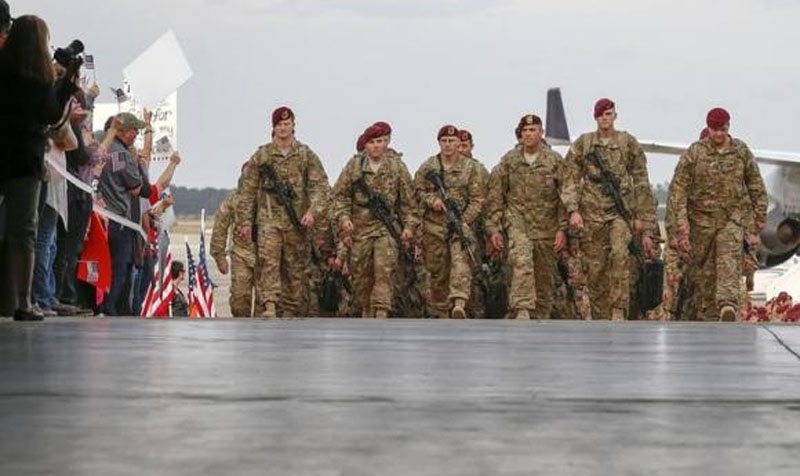 The United States on Monday stood by plans to halve the number of its troops in Afghanistan this year and reduce them further in 2016 following Afghan President Ashraf Ghani’s suggestion that President Barack Obama review his deadline.

But Ghani’s comment adds to a growing debate over whether the White House will stick to its plans, already amended twice, of cutting U.S. troops to about 5,000 by the end of this year and drawing down to a “normal” U.S. embassy presence in Kabul at the end of 2016. Ghani may have also given political cover to Obama should the president decide he needs to renege on his withdrawal pledge to preserve shaky gains made over 13 years of war and to avoid a collapse of local forces that Iraq witnessed last year. “My guess is that he probably will re-evaluate these decisions in due course,” said James Dobbins, who was Obama’s special representative for Afghanistan and Pakistan until July. Among the factors at play are the course of the war itself; reconciliation efforts between the government and Taliban; U.S. public opinion and the 2016 U.S. presidential debate.

If Obama decides to change course, he may find a more receptive domestic audience. American skepticism about the Afghanistan war seems to be moderating in the face of the rise of Islamic State fighters who have seized swathes of Iraqi and Syrian territory following the U.S. withdrawal from Iraq in 2011. According to a Washington Post-ABC poll published on Monday, support for the war in Afghanistan has risen since 2013. A 56 percent majority says it has not been worth fighting, but 38 percent said the war was worth the costs, up 10 percentage points from the record low in July 2013. Speaking in a television interview on Sunday, Ghani made his case for a greater U.S. presence in an understated manner.

“Deadlines concentrate the mind. But deadlines should not be dogmas,” Ghani told the “60 Minutes” program on CBS. “If both parties, or, in this case, multiple partners, have done their best to achieve the objectives and progress is very real, then there should be willingness to re-examine a deadline.” Asked about Ghani’s comments, Army Colonel Steve Warren, a Pentagon spokesman, said, “The drawdown plan remains in effect and there have been no changes to the drawdown timeline.”

When announcing the U.S. withdrawal from Afghanistan on May 27, Obama gave no hint of flexibility, saying the United States would have approximately 9,800 troops there at the start of 2015, roughly half that number at the end of the year, and would be down to “a normal embassy presence” when 2016 ended. While stressing that the U.S. combat mission in Afghanistan would end in 2014, Obama made two exceptions: targeting the remnants of al Qaeda and training Afghan security forces However, he has already shifted his May 27 stance in two respects since making the speech last year. Late last year, Obama decided to keep about 10,800 military personnel in Afghanistan temporarily, 1,000 more than originally planned, due to a shortfall in troops from other nations.

He also quietly authorized a third exception, allowing U.S. troops to act to save Afghan forces “in extremis” from being overwhelmed by the Taliban. Ghani is expected to visit Washington in the coming months, giving him a chance to make his case for a longer U.S. presence in private with Obama and perhaps also to the U.S. public. He may find an ally in the U.S. military. “These are generals who have spent the most important parts of their careers fighting this war and the war in Iraq. They don’t want to see all the gains they have made obliterated,” said Jonah Blank, a former Senate Foreign Relations Committee staff member now at the Rand Corporation think tank. “In the upper reaches of the officer corps there is a real apprehension about what happens if we draw down too quickly.” -Reuters

Two Terrorists To Be Hanged at Multan Jail on Wednesday