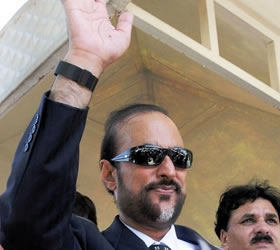 ISLAMABAD: Minister for Law, Justice and Parliamentary Affairs Dr Babar Awan on Monday said that 18th Amendment has stabilized institutions which blocked ways for unconstitutional ventures.Inaugurating a stone-laying ceremony of the Federal Courts Complex, he reiterated that the present government would complete its constitutional tenure and the elections would be held in 2013.
Dr Babar said that they had given complete freedom to media through access to information clause incorporated in the 18th Amendment.Nobody could snatch this liberty. Media should utilize this opportunity as the government was not afraid of criticism, he added.
The Law Minister said it was manifesto of PPP to make people self reliant through creating job opportunities and resolved that it was being emulated under the present government.
He said judges to Islamabad High Court would be appointed from all provinces including the Islamabad District Bar after a decision on 18th Amendment by the apex Court.
He lamented that for the last 63 years, no welfare work had been done for the lawyers’ community. Recounting his achievement as Law Minister, he said that bill for establishment of Islamabad High Court was adopted during his tenure besides a host of other projects for legal community.
The judicial complex would be completed in January 26, 2012 at a cost of 40million rupees, he added.He informed that there would be separate chambers and lifts for the judges.He said the federal capital would have its separate judicial system. – App
Twitter Facebook Google + Linkedin Comments