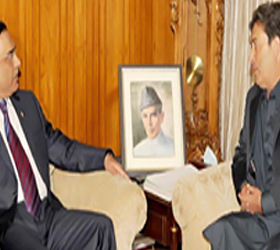 The President while talking to the Chief Minister also thanked the Chinese government for the prompt support and assistance providing immediate relief to the flood victims in those parts of Gilgit Baltistan which were inaccessible from Pakistan.
The President urged the government of Gilgit Baltistan to take all possible steps in collaboration with the federal government for the rebuilding of damaged infrastructure including homes, schools and hospitals in Gilgit Baltistan soon after the completion of damage need assessment process.
The President also stressed for ensuring transparency in all the phases including collection and disbursement of aid money for flood victims – APP
Twitter Facebook Google + Linkedin Comments