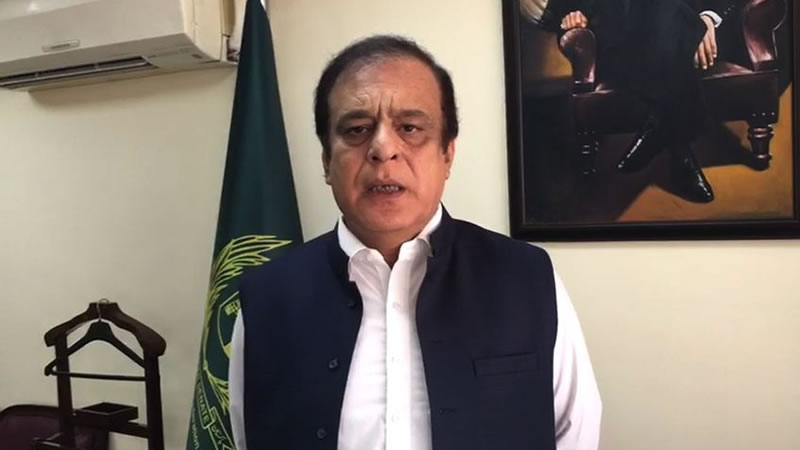 Information Minister Shibli Faraz on Wednesday appealed the people to strictly follow the standard operating procedures (SOPs) to reverse the upward trajectory of coronavirus otherwise the government would have no option but to enforce the lockdown again.

The warning of the return of restrictions came after two provincial lawmakers from Punjab and Khyber Pakhtunkhwa (K-P) succumbed to Covid-19 as the virus continued to spread across the country at an alarming rate, setting a new grim record of 4,000 infections in a single day. The federal government this week started easing the virus-induced lockdown under strict standard operating procedures (SOPs) in an effort to restart the economy. The SOPs and easing of lockdown was aimed at saving lives and people’s livelihood.

However, flouting of the SOPs appeared widespread. “Majority of the people are not adopting precautionary measures even after easing of restrictions,” Faraz told a news conference along with Parliamentary Secretary for Railways Farrukh Habib. “The restrictions were lifted to provide livelihood opportunities to the weaker segments of the society, who have to work daily to feed their children,” the minister added. “The objective is to save the poor from starvation and keep the wheels of economy turning.”

He pointed out that the government had provided financial support to the disadvantaged segments through various initiatives under the Ehsaas programme. Faraz added that the government was pursuing an “organised and coordinated strategy” to stem the virus spread and this was the only reason Covid-19 cases were far less than the earlier estimates and the countries of the region. Stressing the need for adopting precautionary measures, he said that these protected the masses from the pandemic. Faraz concluded that people must follow these SOPs, otherwise, the government would have no option but to re-enforce the lockdown to contain the spread of the virus.

The information minister also expressed condolences on behalf of the government and Prime Minister Imran Khan to the families of the coronavirus victims, including the legislators belonging to both sides of the political divide. The news conference came hours after two provincial lawmakers – K-P assembly member Mian Jamsheduddin Kakakhel and Punjab MPA Shaukat Manzoor Cheema – succumbed to the virus infection, taking the death toll among the lawmakers to four.

Sindh Minister Murtaza Baloch breathed his last on Tuesday, whereas a Balochistan MPA Fazal Agha passed away last month. Also on Tuesday, National Assembly Member Munir Orakzai died of a heart attack. He had recently recovered from Covid-19. Kakakhel was elected from PK-63 Nowshera on a Pakistan Tehreek-e-Insaf (PTI) ticket in 2018 general elections. The 65-year old was shifted to a private hospital in Islamabad after he tested positive for the virus. He had been on ventilator for a few days.

Cheema, 66, hailed from Gujranwala and was elected on a Pakistan Muslim League-Nawaz (PML-N) ticket from PP-51 Gujranwala constituency. He had a month-long battle with the deadly pandemic. He was admitted at the Pakistan Kidney and Liver Institute (PKLI) in Lahore. Cheema remained on the ventilator for the past 10 days. Bilal Farooq Tarar, another provincial lawmaker, said that his condition improved a few days ago and he was taken off the ventilator. However, “all of a sudden it deteriorated today” and he passed away.

PML-N President and Opposition Leader in National Assembly Shehbaz Sharif expressed grief over the death of the lawmaker. “His [Cheema’s] death is a shock to the party as he was a valuable asset to the PML-N and his services can’t be forgotten.” Writing on Twitter, Shibli Faraz expressed deep sorrow over the demise of the PTI leader Jamsheduddin Kakakhel. He said in a tweet that Kakakhel’s services for the party would be “remembered forever”.

The total number of Covid-19 cases soared above 83,000 with more than 4,000 new cases. However, the death toll was slightly lesser than that of a few past days, pushing the total to 1,729 as of Wednesday evening. Khyber Pakhtunkhwa became the third province to reach the grim milestone of 500 Covid-19 deaths after reporting 10 more fatalities during the past 24 hours. The province had so far recorded 11,373 positive virus cases.

Among them are at least 10 MPAs – Madiha Nisar, Kamran Bangash, Dr Amjad Ali, Bahadur Khan, Ziaullah Bangash, Shafiq Afridi, Inayatullah, Faisal Zeb Khan and Salahuddin Khan. Besides three MNAs from the province, Gul Zafar Khan, Ali Wazir and Mehboob Shah, are also infected. By Wednesday evening, the nationwide tally of Covid-19 patients stood at 83,292, including 29,489 cases in Punjab, 32,910 in Sindh, 5,224 in Balochistan, 824 in Gilgit-Baltistan, 3,188 in Islamabad and 284 in Azad Jammu and Kashmir.

The grim scenario hovered as the National Assembly as well as the provincial legislatures prepare for their respective budget session. Sensing the gravity of the situation, Science and Technology Minister Fawad Chaudhry has suggested for holding virtual session of the National Assembly.

“Results of regular sessions of provincial and national assemblies are emerging as several lawmakers have become victims of the virus. So far coronavirus has taken lives of four members of assemblies,” he said, adding 18 lawmakers have contracted the virus and were fighting for their lives.

Earlier, considering the alarming spread of the virus across the country, the federal government mulled over tightening the lockdown in a meeting chaired by Prime Minister Imran Khan to discuss the coronavirus situation in the country.

After the meeting, the Prime Minister Office conveyed a message to the chief ministers and the chief secretaries of the four provinces and Gilgit-Baltistan that in the first phase, people should be urged to abide by the SOPs to save them from coronavirus.

Political leaderships of the four provinces, Azad Jammu and Kashmir and Gilgit-Baltistan should urge people to implement the SOPs, the message said. However, if the SOPs were not implemented the lockdown would be tightened, it added.

During the meeting, the government officials raised concerns that public was not following the preventive measures and the easing of lockdown has ramped up the number of cases and death rate doubled. They maintained coronavirus can only be prevented by tightening the lockdown.

Responding to a question about the locust attack in the country, the information minister told the news conference that like Covid-19, a well thought-out strategy was being followed to make the fight against the locust swarms successful.

“The National Locust Control Cell had been established to tackle the issue in coordination with all the stakeholders,” he said, adding that all the relevant government departments were working in close coordination to address the issue. “By June 10, 15 planes would be available for the aerial spray in the affected areas.

Referring to another question about the political situation in the country and the opposition’s outcry of victimisation, the minister dispelled the impression being given by the political opponents, especially the Pakistan Muslim League-Nawaz (PML-N) leaders.

He said Shehbaz Sharif was the guarantor when former prime minister Nawaz Sharif was permitted to go to England for medical treatment. “He [Shehbaz] should now be questioned as to why his elder brother is absconding, who was seen roaming in London,” Faraz said.

The minister added that the PML-N was trying to “befool the masses” by raising slogans of victimisation but the people fully knew that those, who had properties and families abroad, could not be their well-wishers.

He stressed that the future belonged to only those parties who believed in serving the public and not in loot and plunder of the national wealth “like the past rulers”. He assured that action would be taken against the mafias who held the country’s economy hostage for their vested interests.