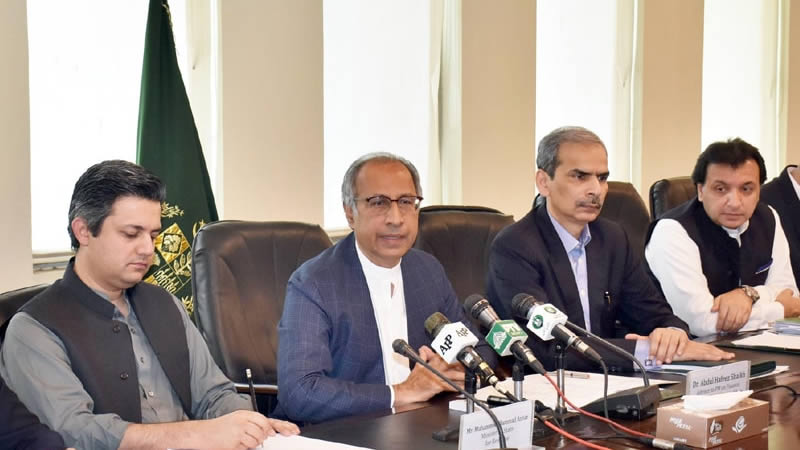 Attributing the prevailing price hike to suspension of trade with India, failure of provinces in keeping administrative control over the middleman and seasonal factors, the government’s economic team has forecast easing out the inflationary pressure in the next two months.

Speaking at a news conference after a meeting of the federal cabinet on Tuesday, Prime Minister’s Adviser on Finance & Revenue Dr Abdul Hafeez Shaikh and Revenue Minister Hammad Azhar enumerated some positive comments from international lending and rating agencies and said that national economy was now set to move from stabilisation to recovery mode and lead to higher growth.

Mr Azhar said the prevailing price hike, particularly the food inflation, emanated from suspension of trade with India and seasonal factors and the role of the middleman. He said the centre was taking up the matter with provincial governments for setting up of Sasta Bazaars and effective use of magistracy system to ensure relief to the public. He said the inflation would start going down in January-February.

He said economy could not be transformed from a default or crisis situation to growth mode in a short period, but the gains made so far were now enough to solidify them into higher growth for job creation in the next phase beginning in a couple of months.

Mr Shaikh said some price factors like international oil and energy prices were beyond the government’s control, but then it was ensuring enough safeguards through subsidy, income support programme, health insurance and cheaper availability of essential items to ensure vulnerable segments remain protected from price hike.

Dr Shaikh said international agencies like the World Bank, the Asian Development Bank, the International Monetary Fund and the Moody’s rating agency were appreciating positive signs in Pakistan’s economy achieved through effective reforms, improvements in external and fiscal accounts. He said the exports were now rising after five years, current account deficit on a decline, fiscal deficit had been controlled and primary deficit turned into surplus.

He said the exchange rate had also been stabilised and as a result portfolio and foreign direct investment was increasing. The World Bank president wanted improved relationship with Pakistan, the ADB designed special products to enhance its assistance by $3 billion and the IMF not only appreciated economic performance but also noted that all promises were met with margin and recommended disbursement of about $500million. On top of that, the Moody’s also raised Pakistan’s outlook from negative to stable.

When reminded by a questioner that similar positive commentaries from these international agencies used to come in the past despite the country’s repeated return to IMF programmes, Dr Shaikh conceded that they would appreciate the performance as long as the economy remained on the positive trajectory as had been the case in the past. But, he added, the difference this time was that the country would not need to go back to IMF because there was a merit-based government in place now whose national interest was above all other interests.

Asked if anti-press statements by members of the cabinet followed by mob attacks on media houses were helpful amid these image building developments, Dr Shaikh said obviously such unpleasant developments in Pakistan could not be appreciated anywhere.

Answering a question about discussions in the cabinet over expected proceeds of 190 million pound sterling from the United Kingdom on account of settlement of a property dispute, the adviser declined to go into details, saying the details were still flowing in from the UK’s national crime agency.

He said the stable exchange rate had attracted $1bn portfolio investment in Pakistan and FDI posted 236pc increase to $650million during first five months of the current year. Also, domestic investors had started showing confidence in the economic turnaround and stock market had crossed 40,000 points and Bloomberg newswire had described Pakistan as the best performers in dollar terms over the past three months.

Dr Shaikh said tax revenues had improved by 16pc in five months while current expenditures had been kept under tight control. He conceded the tax revenue were behind a massive collection target mainly due to import compression but the government would cross non-tax revenue target of Rs1,200bn by Rs200-300bn as an insurance against revenue shortfall.

He said the government was now supporting export growth and construction sector though lower energy prices and cheaper interest rates through subsidy and tax refund mechanism had been automated that could refund 100pc claims within 72 hours.

Mr Azhar did not agree to a questioner that $1bn portfolio investment was hot money on the Egyptian model due to higher interest rate and its withdrawal would be more painful. He said international investors looked at real rate of return and not higher interest rates.

He conceded that real economy sectors like large scale manufacturing and agriculture sectors had not yet started showing positive trends as such but it should be kept in mind that SMEs, services and exports were also part of the GDP that was estimated to grow at a rate of over 3pc during the current year and better than the last year.