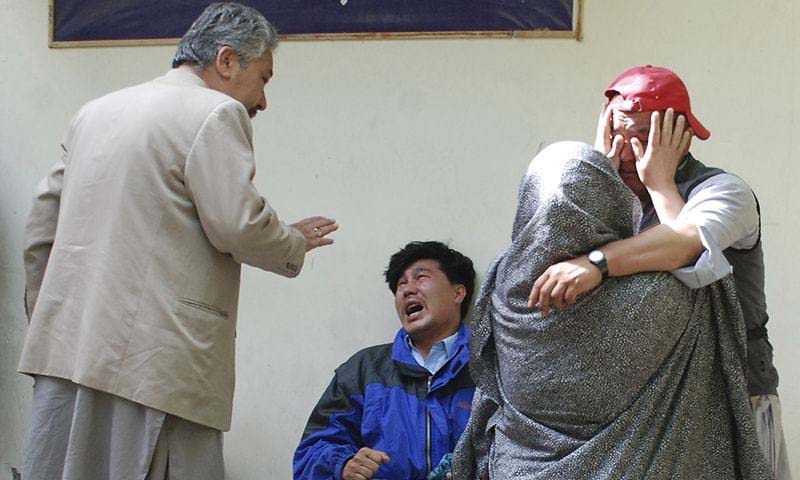 At least 20 people were killed and 48 injured in a blast believed to be targeting members of the Hazara community in Quetta’s Hazarganji market on Friday morning. The attack claimed the lives of at least eight Hazara and one Frontier Corps soldier who was deputed for the community’s security, said DIG Cheema. Others who lost their lives included shopkeepers, businessmen and citizens working or residing in the area. Four FC soldiers were among the injured. Deputy Inspector General (DIG) Abdul Razzaq Cheema, who was present at the site of the attack, said the blast targeted the Hazara ethnic community.

“The attack took place in a [green grocer’s] shop. An Improvised Explosive Device (IED) was planted in a gunny sack filled with potatoes. Whether it was timed or remote-controlled, our experts will tell. Right now they are investigating,” DIG Cheema told reporters at the site of the attack. “We are giving our attention to the wounded at this time,” he said. The injured have been shifted to hospitals ─ where an emergency has been imposed ─ for treatment.

“We have arranged transportation back [home] for Hazaras who remained unhurt in the attack,” he added. However, Home Minister Ziaullah Langove, who held a press conference later in the day, said that the blast was not targeting “a specific community”. “Our guess is that no specific community was targeted. Marri Baloch and FC personnel were among those killed as well. The numbers of the Hazara community were just greater,” Langove said. He also described the blast as a suicide attack.

Qadir Nayil, a Hazara community leader, asked the government for provision of better protection. “Once again our people were the target and once again we will have to bury our dear ones,” he said. “We demand more security from the government and all those involved in today’s act of terrorism should be found and punished.”

The Hazarganji area in Quetta has been witness to similar attacks in the past. Hazara shopkeepers are known to stock vegetables and fruits from the Hazarganji bazaar to sell at their own shops. They are provided a security escort to and from Hazarganji since they are constantly under threat of attack. DIG Cheema, speaking to DawnNewsTV, explained that “people from the Hazara community come here daily in a convoy from Hazara Town to buy vegetables. They are escorted by police and FC, and then they return there. It was the same today,” he said.

“There were 11 cars and 55 people. Police and FC were in front of them and behind them. They [the security] brought them to Hazarganji. When they entered the sabzi mandi, the police expanded their perimeter to the gates so that no one would enter, while the FC took their positions,” he continued. “Around 7:30am, they [the shoppers] were loading [produce] at a shop when the blast happened.

“The security forces are here, police are here. What more can we do? We secure them [the community] and travel back and forth with them. If something is hidden in a shop, then the shopkeepers will need to be probed,” he said. He explained that the last time there had been an attack in the area, he had written to the administration and asked them to keep the area clean so that there were no hiding places for bombs. He also regretted that the Safe City project for Quetta had run into delays, and that there was a shortage of CCTV cameras in the area. The attack came after a lull of at least a year in attacks against Hazaras, though there have been isolated shootings.

Prime Minister Imran Khan condemned the blast and sought an inquiry report into the attack, Radio Pakistan reported. Balochistan Chief Minister Jam Kamal strongly condemned the attack. He assured that the elements involved in the attack and those leading them would be proceeded against, and directed the provision of the best medical treatment to the wounded. “People who have an extremist mindset are a menace to society,” the chief minister asserted. “We must foil the conspiracy to disrupt peace.” PPP Chairman Bilawal Bhutto Zardari, Co-Chairman Asif Zardari and PML-N spokesperson Marriyum Aurangzeb also condemned the attack.

Hazaras are disproportionately targeted by sectarian violence as they are easily identifiable due to their distinctive physical appearance. Nearly half a million Hazaras have settled here since fleeing Afghanistan to escape violence in their homeland during the past four decades. A report released by the National Commission for Human Rights (NCHR) last year stated that 509 members of Hazara community were killed and 627 injured in various incidents of terrorism in Quetta from January 2012 to Dec 2017. NCHR official Fazeela Alyani had earlier said that all these lives were lost in Quetta. According to the NCHR, targeted killings, suicide attacks, and bomb blasts have inflicted harm to daily life, education, and business activities of ethnic Hazara community members in Balochistan’s largest city.

Alyani had also explained that the fear and intimidation forced Hazaras to migrate to foreign countries, while target killings forced Hazara students to abandon their studies. Balochistan has seen at least three others blasts in different areas over the last month, with varying targets. Four policemen were targeted in an improvised explosive device (IED) blast in Quetta, while an IED blast targeting a passenger train in Balochistan’s Dera Murad Jamali killed four people. At least two people were killed and 11 others injured in a bomb blast in a Panjgur bazaar.