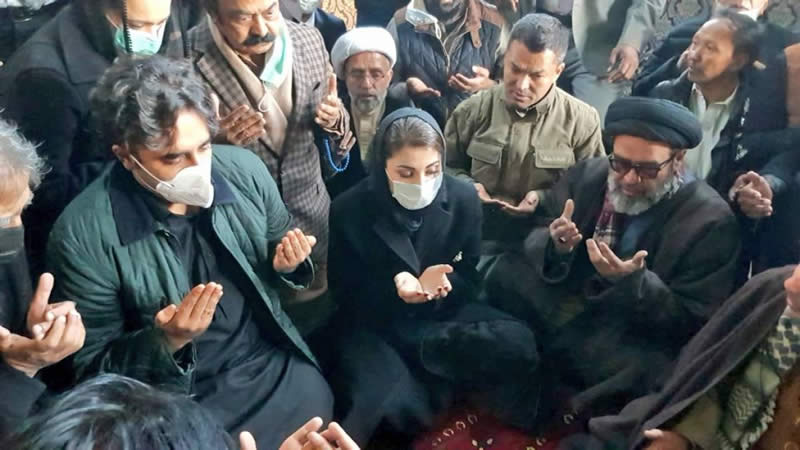 Hundreds of Hazara community members kept up a vigil alongside coffins carrying bodies of 11 slain colliers for a fifth consecutive day on Thursday disregarding a request from the prime minister to bury the victims so that their souls could find peace.

The ethnic Hazaras, who are predominantly Shias, have repeatedly been targeted over the last decade in attacks claimed by sectarian terrorist organisations – including the ultra-extremist Islamic State group, also known by its Arabic name of Da’ish.

The regional franchise of the Da’ish terrorist group, which is operating out of Afghanistan’s lawless border regions, has claimed responsibility for the grisly slaughter of 11 Hazara coal-miners in Machh area of Bolan district, around 100kms southeast of Quetta, on Sunday.

The Hazara community members have been camping in Quetta along with the bodies of the slain miners for the past five days saying the burials would only take place if Prime Minister Imran Khan himself visited the camp to give them an assurance that the unabated targeted killing of the Hazaras would stop.

Protests have, meanwhile, spread to other cities, including the economic powerhouse of Karachi. Police said there were sit-ins in at least 19 locations in the sprawling metropolis. Flights were delayed because access to the airport had been affected.

PPP Chairman Bilawal Bhutto-Zardari and PML-N Vice-President Maryam Nawaz, accompanied by their party colleagues, on Thursday visited Quetta to express solidarity with the bereaved community over the tragedy and offer condolences.

The visit came a day after Prime Minister Imran Khan requested the Hazara community to bury their dead so their souls could find peace. Moreover, he assured them that he would visit soon – something the community has set as condition for calling off the protest sit-in.

The Hazara colliers were bussed from a shared residential room near the coal mine where they worked to an unfrequented mountainous area where they were slaughtered in a mass execution that has triggered nationwide condemnation.

“The throats of all coal miners have been slit, after their hands were tied behind their backs and (they were) blind folded,” a security official had told Reuters, requesting anonymity.

Before the Bilawal-Maryam visit, Majlis-e-Wahdat-e-Muslimeen leader Allama Syed Hashim Moosvi quashed rumours of any agreement between the community and the government on calling off the sit-in. “Our protest will continue until our demands are met,” he said, while calling upon community members elsewhere in the country to continue their protests.

Addressing the protesters in Quetta, Bilawal said that the prices of everything were skyrocketing in this country, but the blood of its labourers and its lawyers is cheap. “Unfortunately, we live in a country where even the dead have to be dragged into politics,” he lamented.

The PPP chairman said he could not find words to console the Hazara community. “You’ve staged protests previously, and are out on the street again only to demand the right to live!”

He recalled that the PPP had dismissed its government in Balochistan following a string of terrorist attacks on the Hazara community had triggered similar protest in 2013.

“Then too, you had put forward your demands. We had even dismissed the government,” he told the protesters, regretting that targeting of the community had continued unabated through the terms of subsequent governments.

Bilawal said he belonged to a family of martyrs, yet his family too has been unable to provide justice to its own martyrs. “However, I promise you that until I’m alive, until I’m politically active, we will only demand that the poor of this country be allowed to live in peace”.

The scion of the Bhutto dynasty said, “We call upon the state that the most patriotic people in this country have been staging a protest sit-in, if not you, then who can provide justice to them?”

“The first and foremost responsibility of a state is to provide security to its citizen,” Bilawal added.

“We want to remind you [the state] that you promised the families of the APS attack victims that you will eliminate terrorism, but you could not. You promised the implementation of the National Action Plan, but you did not,” he said, referring to the methodical killing of nearly 150 pupils and staff at Peshawar’s Army Public School in December 2014.

“I’m not asking for justice for Shaheed Benazir Bhutto or Zulfikar Ali Bhutto. I am only asking you to provide justice to the labourers,” he said.

PML-N Vice-President Maryam Nawaz used the occasion to mount another verbal attack on political arch-nemesis Imran. “Does your shamelessness have any limits?” she said, directly addressing the prime minister.

“All they are asking for is that you come here and condole with the bereaved families and pray for the departed souls. Is your ego bigger than those whose coffins are lying here,” she said.

Condoling with the bereaved families, Maryam said she could not even imagine what they must be going through. “Only the one who suffers the loss can really understand what it feels like to be in such a situation.”

“You are a parent yourself. Try to put yourself in their shoes for a moment and feel their pain. For God’s sake have some mercy on these people,” the PML-N leader said, while addressing PM Imran.

Maryam said she had been informed by the mourners that they would not bury their dead if the prime minister does not show up – no matter how long it takes. “If you do not come and condole with them, then people won’t let you sit in Islamabad,” she said.

Meanwhile, Chief Minister Jam Kamal Khan convened a high-level meeting to take stock of the overall security situation in the province, which has seen a sharp uptick in violence after a relatively long lull.

The chief secretary said that effective measures had been taken following the Machh tragedy to protect the life and property of the people across the province.

The chief minister ordered immediate removal of Machh’s deputy commissioner and district police officer for their failure to prevent the grisly massacre of the Hazara colliers. He also ordered immediate compilation of data of coal field workers and strict implementation of labour laws.

The meeting decided to investigate the Machh tragedy and fix responsibility. For this purpose, the chief minister directed that a joint investigation committee (JIT) be formed immediately.

Meanwhile, in a show of solidarity with the bereaved Hazara community, the business fraternity observed a shutter-down strike in Quetta. All main business centres of the provincial capital remain shut.