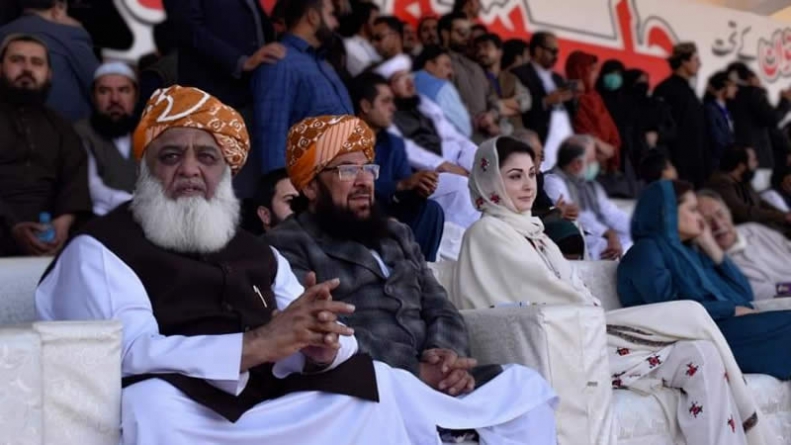 Despite the authorities’ security concerns, the opposition parties on Sunday staged a public gathering in Quetta — their third under the banner of the Pakistan Democratic Movement (PDM) alliance formed to oust the PTI-led government – as their leaders highlighted the issue of enforced disappearances and other grievances of the people of Balochistan and pledged a turnaround for the province and the rest of the country.

Addressing the mammoth rally held at the provincial capital’s Ayub Stadium, PML-N Vice President Maryam Nawaz reiterated her party’s “Vote Ko Izzat Do” stance, maintaining that the reason for Balochistan’s backwardness and deprivation was that its people’s vote was not respected.

She added that the rulers in the province were not accountable to its people but those who were “pulling their strings”.

Striking a nerve with the participants of the rally, the PML-N leader vowed to put an end to enforced disappearances in Balochistan.

“”Husbands and brothers will no longer go missing,” she added.

Referring to the case against Supreme Court’s Justice Qazi Faez Isa, Maryam said standing in Balochistan she could not help but remember the contribution of the judge’s father, Qazi Muhammad Isa, a prominent politician who was among several leaders to have played an important role in the Pakistan movement.

“A case against this great man’s son, who is the only judge from Balochistan among existing Supreme Court judges, was shameful,” the PML-N leader said, adding that the top court’s judgment in which it had quashed the presidential reference against Justice Isa had exposed the intentions of those who were behind the move.

The PML-N vice president went on to express solidarity with the Baloch students protesting in Lahore for the restoration of scholarships at the Bahauddin Zakriya University. She had earlier met them in Lahore on Friday after they arrived in the provincial capital on foot from Multan.

Garnering much appreciation for adorning a Balochi dress, Maryam said: “I was asked at the hotel about the message I wanted to give to the people of Balochistan by wearing this dress, and I said that this meant that I do not only stand for the people of Punjab.”

Addressing the gathering via video link from London, former prime minister Nawaz Sharif said he was pleased to see the number of people who had turned up at the event. He said the presence of such a huge crowd meant “nobody will be able to trample over the sanctity of vote”.

The PML-N supremo also raised the issue of enforced disappearances in the province. “I am aware of problems faced by the Baloch people,” he said.

“I feel the pain when I see the victims [of enforced disappearances]. The issue of missing persons continues to persist.”

The former premier repeated the allegations he had made at the PDM’s first power show in Gujranwala about the establishment violating its constitutional ambit by rigging the 2018 elections and interfering in politics.

Speaking about the arrest of his son-in-law Capt (retd) Mohammad Safdar in Karachi, Sharif condemned the “shameful” manner in which the police “broken down” the door of the hotel room where his daughter Maryam and her husband were staying and violated their privacy. “These things prove that there is a state above the state,” he added.

The Sharif family patriarch went on to censure the PTI-led government for the rising food prices. “I know that the current government’s ineptness and anti-people policies have made it difficult for a common man to afford two meals,” he said.

The PML-N supremo maintained that the time had come to change the country’s destiny. He added that the PDM was standing up to the “unconstitutional powers” that were responsible for the country’s state of affairs.

“God helps those who help themselves. The people have now come out to bring a change.”

Remembering the late National Party chief Hasil Khan Bizenjo, Sharif said the deceased senior politician was in his thoughts. He went on to pay homage to the Bizenjo’s politics, appreciating the principles that he stood for.

“I salute the Sindh police who refused to become Imran Khan’s Tiger Force,” he added, referring to circumstances surrounding Safdar’s arrest and the developments in its aftermath.

The PPP chief ruled out claims that his party would part ways with the opposition alliance.

“Those who are dreaming of breaking the opposition alliance will never succeed… we are not among those who back down from their stance.”

Bilawal said the despite having abundance of natural resources including gas and gold mines, the people of Balochistan were living in a miserable condition.

“The people of Balochistan are brave and they know how to get their rights.”

Speaking on the issue of missing persons, Bilawal said people were being abducted in broad daylight and all state institutions were helpless in resolving this matter. “This tyranny has to be stopped and if this continues to happen I don’t think this country could survive.”

The PPP chairman said people across the country wanted freedom from poverty and unemployment and were demanding the restoration of the genuine democracy.

“What kind of democracy is this where no one including judiciary, media and people are free?”

The PPP chairman demanded that the PTI-led federal government should make the multi-billion dollar CPEC project inclusive so that people of Balochistan and Gilgit-Baltistan could also benefit from it.

In his speech, JUI-F chief Maulana Fazl Rehman said the people of all four provinces were empowered through the 18th Constitutional Amendment and now attempts were being made to curtail their autonomy.

“No one should dare to think that they can curtail the rights of smaller provinces and occupy their resources… we cannot let anyone to snatch the rights of the people.”

The firebrand cleric, who is the president of the opposition alliance, claimed that the “selected” government has brought down the country’s GDP growth rate from 5.6 to 1.5 per cent during its two years in power. “I have always said that the country should not be handed over to these incompetent rulers who have now destroyed its economy,” he added.

“Today everyone is aware of the reality that for the survival of the state only strong defence is not enough but a stable economy is equally indispensable. We have the example of Soviet Union which collapsed due to economic crisis.”

The JUI-F chief said India was not willing to normalise ties with Pakistan because “Modi knows Pakistan’s economic situation is very bad and they are taking benefit of our weak economy”.

On foreign policy, Fazl said PM Imran had himself proposed to divide Kashmir region into three parts and he also prayed for the success of Modi in elections. “They have sold Kashmir and they don’t give importance to the issues of Kashmiris.” He claimed.

Fazl said he held the state intuitions of the country including armed forces in high regards. “I just want to say to powerful people to not make mockery of our love or else we will enter into a blind alley.”

The JUI-F chief also condemned the arrest of Safdar and the “detention” of MNA Mohsin Dawar at the Quetta airport.

BNP-M President Sardar Akhtar Mengal in his speech highlighted the plight of Balochistan, particularly taking up the issue of missing persons.

He spoke about the injustices with the province but vowed that the Baloch people would never abandon the country and defend its borders.

The BNP-M chief demanded that the people of Balochistan should be able to reap the benefits of CPEC projects similar to how they had led to development in other parts of the country.

“We have joined the PDM on the assurance that whichever party comes to power, it will give rights to Balochistan.”

Among the first leaders to address the rally, Qaumi Watan Party chairperson Aftab Ahmad Khan Sherpao said inflation had become one of the biggest problems in the country today.

He added that medicines were being sold at double their previous rates.

Former Balochistan chief minister and National Party leader Abdul Malik Baloch accused the federal government of trying to occupy the islands of Sindh and Balochistan by promulgating an ordinance.

He also lashed out the Centre for its “discriminatory” attitude towards Balochistan.

PPP’s Raja Pervez Asharaf, while addressing the rally, said the people of Pakistan were now on one side and the government on the other. “You [PM Imran] had called all the other political leaders corrupt…and now even a child knows how incompetent your governance is,” said the senior PPP leader.