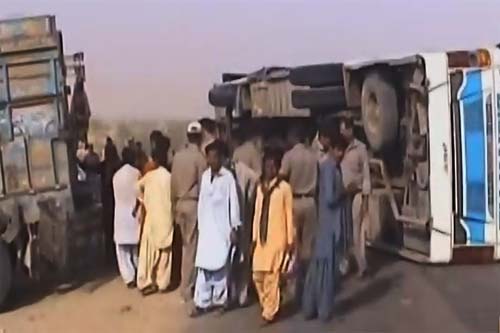 At least 10 people, including two women, were killed and 25 others were injured early on Monday during a collision between a passenger coach and a truck in Balochistan’s Uthal area.

The passenger coach was coming from Quetta when it collided at the Uthal coastguard check post with a truck travelling from the province’s Gwadar region. The truck driver died on the spot while four passengers were said to be in a critical condition. [contentblock id=2 img=adsense.png]

The injured were being shifted to Karachi for medical treatment. Pakistan has one of the world’s worst records for fatal traffic accidents, blamed on poor roads, badly maintained vehicles and reckless driving. -dawn