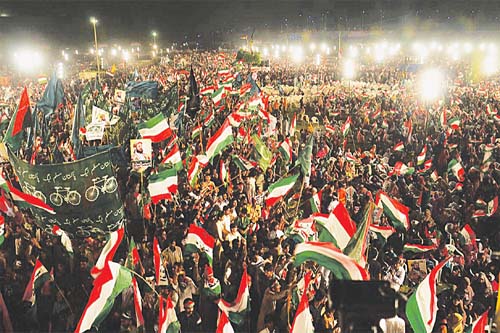 He urged people to vote PAT to power so that it could implement its agenda and warned that the country would be ruined if the government was not removed.

Reiterating his demand for accountability and reforms before midterm elections under a national government within constitutional bounds, Mr Qadri said his party would not leave the field open (for rivals) if elections were “imposed” without reforms and would field candidates in every constituency.  He again made an appeal for votes and funds for the cause of revolution. [contentblock id=2 img=adsense.png]

He called upon people to become revolutionaries and knock down the current system which had brought them nothing but miseries and said his revolutionary movement and sit-in would be spread to every nook and corner of the country. Spelling out his 10-point agenda, the PAT leader said devolution of power to the union council level would be introduced under the plan.  [contentblock id=3 img=adsense.png]

The agenda included provision of essential commodities to the poor at half the prices, free healthcare and education up to the matric level, economic empowerment of women, removing disparity among salaries of different pay scales, purging the country of sectarianism, distribution of government land among landless farmers, electricity supply to small towns, shelter for the homeless, reduction by half the utility bills of people earning less than Rs15,000 per month and doing away with tax on utility bills of the poor. -dawn