MQM breaks up with PPP, again 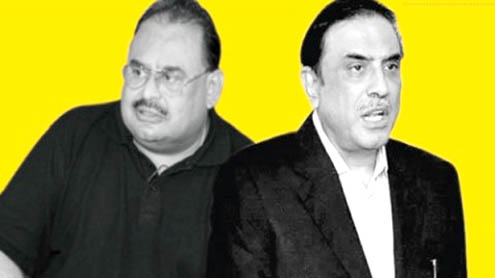 MQM breaks up with PPP, again!

KARACHI: Announcing that the Muttahida Qaumi Movement (MQM) would take part in the upcoming general election from every constituency of Sindh and Pakistan on its own, the party’s Rabita Committee on Thursday said the Pakistan People’s Party had closed the doors to future alliance.

A joint meeting of the MQM Rabita Committee was held in London and Karachi after an in-camera briefing in the Sindh Assembly over Karachi’s law and order, according to a statement issued on Thursday.The committee vehemently condemned the move of the Sindh Law Department to withdraw cases against wanted Lyari gang war criminals.“The MQM formed alliance with the ruling PPP for the prosperity of Sindh and to maintain brotherhood among the people of the province, however, the ruling leaders are patronising the terrorists of gang war,” the party claimed.The terrorists of People’s Aman Committee have killed Urdu-speaking people by identifying them in buses. Besides, the criminals have thrown the bodies of innocent people in various parts of the city, the statement added.

Moreover, gangsters are also involved in kidnapping businessmen for ransom, attacking police force with rockets and weakening the city’s economy, it said, adding that it was considered that the leadership of the ruling party was openly patronising gangsters and the withdrawal of cases against them was a result.“This move has closed the doors for future election alliance,” the party said.It was decided by the Rabita Committee that the MQM would take part in the upcoming general elections individually and their candidates would contest elections from all constituencies.

SIND ASSEMBLY IN-CAMERA SESSION: Earlier during an in-camera session of the Sind Assembly, Inspector General of Police (IGP) Fayyaz Leghari told the lawmakers that he was under pressure to withdraw cases against leaders of the banned People’s Aman Committee.The confession by the police chief was not appreciated by the MQM lawmakers, who staged a walkout, boycotting the in-camera assembly session.The first ever in-camera briefing to legislators on the city’s law and order situation was arranged in the Sind Assembly under the chairmanship of Speaker Nisar Ahmed Khuhro on Thursday. It was believed to be a session which was attended by almost all members.

However, the chief minister, who also holds the portfolio of home affairs, did not bother to attend the briefing on the city’s law and order situation and was busy touring his native town of Khairpur.Before the start of the important session, galleries for media, visitors and bureaucrats were occupied by a large number of people. However, the speaker passed an order to vacate the galleries and undertook an oath from legislators to keep discussion contents of the session confidential.

Some parliamentarians, wishing not to be named, told Media that there was nothing new in the police chief’s briefing.“He just presented before the session the ‘crime figures and the arrests made by the police’,” they said. However, the IG was bamboozled by the lawmakers’ cross questioning, they added.Furthermore, the Sindh IG, who was supposed to brief the House on assassinations of MQM MPAs Raza Haider and Manzar Imam, told the members that he had forgotten to bring the reports and they were in his office, sources added.MQM MPA Khwaja Izhar asked the IG about the withdrawal of cases against the banned Aman Committee to which the police chief confirmed that cases were being withdrawn.

The IG said he was under pressure from the authorities to withdraw the cases and the process had already been initiated. However, he did not mention any names or give additional detail.Following Leghari’s confession, MQM members raised slogans against the government and walked out of the assembly session, sources added.While talking to media later, the MQM’s Sagheer Ahmad, who is also the provincial health minister, vehemently condemned the move regarding withdrawal of cases against Aman Committee leaders.

“The government is patronising Lyari gangsters who were involved in killing of innocent people, most of whom belonged to the Urdu-speaking community,” he said.“This move has raised a question mark over the credibility of the PPP leadership. The MQM will never make seat adjustments or a coalition with the PPP in the upcoming elections,” he said. The Sindh IG had talked about withdrawal of cases against Aman Committee leaders, he said, and condemned Law Minister Ayaz Soomro for writing a letter to police in this regard.MEMON DENIES: Contradicting Leghari’s statement, Sindh Minister for Information Sharjeel Memon said no case had been withdrawn against the Lyari gangsters.

“MQM will be taken into confidence before withdrawal of cases. MQM was a coalition partner, it is and it will remain one,” he added.Responding to a question on the IG’s statement that the video footage of clerics’ killings on Shahrah-e-Faisal recently was sent to London, the information minister replied that “the lawmaker who revealed this had violated the oath they had taken before the in-camera session”.When contacted, official sources said the home department had instructed the law department to complete legal formalities so that cases against all leaders of the banned Peoples Aman Committee could be withdrawn. The withdrawal of cases against the Aman Committee was the result of negotiations between MNA Faryal Talpur and the elders of Lyari. – PT