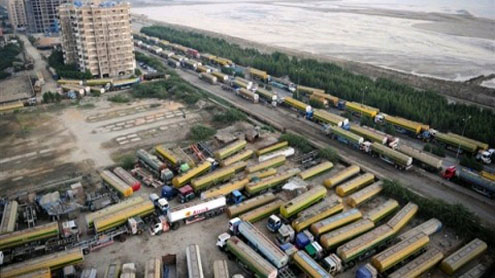 Karachi: An acute shortage of oil in the country is looming as the supply from Karachi terminals is feared to be suspended amidst protest of oil tankers against cancellation of contracts by Pakistan Vanaspati Manufactures Association (PVMA).

All Pakistan Oil Tankers Association (APOTA) has announced to stop all kinds of up country oil supplies if their demands are not met within next 72 hours. Bakhtawar Khan, Chairman of the Association, told Profit that they have stopped over 5,000 vehicles of theirs as a protest against cancellation of the contract of supplying oil and ghee across the country. 3,000 to 4,000 containers have also been stopped at Port Bin Qasim area against the association’s protest over illegal arrest of their fellows as well as cancellation of contracts.

He said they were providing the service to the mills for the last 25 years, but their contract had ended suddenly while giving the facility to NICL. Though PVMA has also asked the government to provide security and ensure safe transportation of edible oil consignments from Karachi to other cities after the recent incident of burning oil tankers at Bin Qasim Area of the city, the row between the two parties may cause serious shortages of oil up country.It is worth mentioning here that owing to the present situation, the price of edible oil in the country has already jumped.

Bakhtawar Khan, leading a protest on National Highway, near Port Qasim on Thursday, said though the highway was opened for traffic after the protest, the sit in would be reorganised if the concerned authorities did not take notice of the grave situation within the next two days. “No official form the government has so far came here or contacted us to resolve the issue,” he said The tussle between the two parties was going on since PVMA started to supply through National Logistics Cell (NLC) from Karachi terminal to Punjab, Balochistan and Khyber Pakhtunkhwa.

Edible Oil Tankers Owners Association (EOTOA) had suspended its operation first on January 10 against the decision of PVMA for supply of the oil through NLC while neglecting the agreement signed with private transporters. However, according to sources at PVMA, the association was free to decide how to supply edible oil to the country’s markets. The private transporters were not found reliable and up to the mark of the manufacturers. The repeated complaints of oil theft and other issues have forced the association to supply the commodity through NLC.

Almost 2,500 oil tankers are engaged in transportation of edible oil. According to a report, the annual consumption of edible oil in Pakistan is around two million tonnes and its usage in Pakistan is 11-12 kg per person, annually and 7-8 kg per person annually, in India. Pakistan locally produces just half a million tonnes (450,000 tonnes from cotton seeds and 50,000 tonnes from sunflower and mustard. The country is importing edible oil worth Rs300 billion annually to meet the local demand.