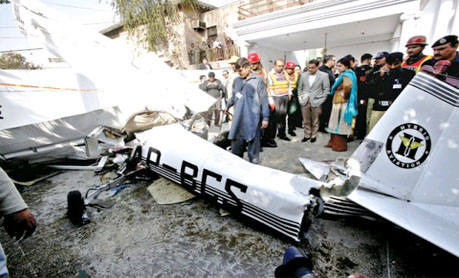 LAHORE: A teenage trainee pilot and his female instructor were found dead, shortly after a two-seater airplane on a training flight crashed in the porch of a house, situated in the Model Town area on Thursday afternoon, police and rescue workers said.

The aircraft, Cessna 152, which belonged to the Hybrid Aviation, crashed near the well-guarded residence of Chief Minister Shahbaz Sharif some 30 minutes after it took off from the Walton airport. Sources in the Civil Aviation Authority (CAA) said initial findings revealed that some technical fault, most probably engine failure, caused the incident.According to local residents, the plane crashed in House No 143 Block-H; however, the residents remained unhurt, who said that the crash caused a huge explosion.

“I saw the plane zigzagging in the air. Then, all of a sudden it came down and crashed,” Omar Draz, a security guard, who also witnessed the incident, told reporters at the site.The deceased were identified as Anita Qureshi, flight instructor, and 18-year-old trainee pilot Waqar Asif. They are stated to be the residents of Karachi. Rescue workers said that they rushed to spot soon the local residents told them that an aircraft crashed inside the residence of one Omar Hussain in H-Block Model Town.

Ashraf Ali, a close relative of Waqar Asif, told reporters that the young trainee pilot was on his last flight as he had almost completed his 100 hours journey. “We had planned his marriage next month,” the father-in-law of the deceased said with tears rolling down from his cheeks.Soon after the plane crash, heavy police contingent rushed to the spot and cordoned off the scene, where a large number rescue workers were seen struggling hard to pull out the bodies from the plane’s wreckage.According to the experts, the accident highlights the risks of engine failure during training and the importance of proficiency checks in the small aircrafts.

Meanwhile, Mian Shahbaz Sharif visited the site and collected information from the rescuers and locals.On the other hand, sources say the Civil Aviation Authority (CAA) seized the record of the Hybrid Aviation and sealed its office at the Walton airport.A senior CAA officer, while seeking anonymity, said an investigation team had arrived from Karachi to look into the matter; however, he refuted the impression of sealing the flying club, saying action would be taken only after the investigation.

He said record could be demanded from the club management but decision to seal the office of club would only be taken if it was established during the course of inquiry that incident took place due to negligence of the management.A pilot of Cessna aircraft said the club owner possessed new aircrafts and 95 percent cases of crash were happened due to the human errors. He, however, said the private owners mostly had aged planes.Plane crashes into Lahore house; two dead. – Nation