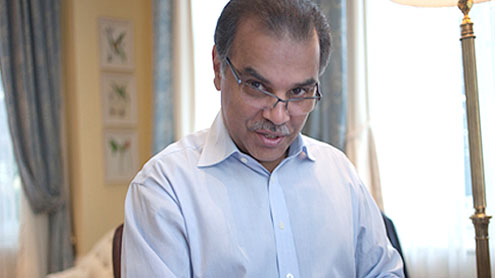 ISLAMABAD: The memo scandal’s lead witness Mansoor Ijaz continued recording his testimony on Thursday, with startling claims about how Hussain Haqqani, the former Pakistani ambassador to the US, okayed the memo’s final draft after securing approval from the “boss” (President Asif Ali Zardari) to seek American pressure for restricting “bad boys” – the chiefs of Pakistan Army and the ISI – from launching a feared coup.

“After repeated confirmations that ambassador Haqqani has obtained approval from the ‘boss’, and it was after his go-ahead signal that I forwarded the final draft of the memorandum to General James Jones at 1:28am on May 10, 2011, who forwarded the same to Mike Mullen on the very next day followed by a phone call either from the US president or Mike Mullen himself to ‘Pindi’,” Ijaz told the memo commission via video link from the Pakistani High Commission in London.

The Pakistani-American businessman continued from where he had left on Wednesday, the first day of recording his statement, and presented more documents to the judicial commission in support of his claim that he drafted and delivered the memo to the top US officials on the advice of former ambassador to the US Hussain Haqqani.“On May 10, 2011, around 9am, I called Haqqani at the Inter-Continental Hotel in London, and told that the message had been sent to the US interlocutor and also discussed the contents of the memo.

I enquired from him whether he had obtained the approval (from the “boss”) and he responded: he has boss’s approval and gave me a go-ahead, by which he meant the delivery of the memo to James Jones. At that time, it might be the assumption of Haqqani that Jones would be the interlocutor. It is possible that Haqqani assumed that I would choose James Jones as interlocutor,” he told the enquiry tribunal from London.

“On May 11, I received a message from Jones that Mansoor message delivered,” Ijaz claimed. He further said that Haqqani wanted the memo delivered to Mullen ahead of a scheduled meeting between the former US military chief and some Pakistani officials.Ijaz said he had sent the first draft of the memorandum to Haqqani on May 9. “I made a four minutes call to Haqqani to inform him that the memo had been drafted.

After sending a copy of the draft memo to Haqqani, I called James Jones. I informed him that I have conveyed Haqqani that the message has to be in writing and has the requisite authority of the highest authority in Pakistan,” he said, adding that he had sent a message to Haqqani stating that the message would be delivered to Mullen.

“Three minutes later, Haqqani confirmed receiving the draft of the memo. However, he informed that he was tweaking it. He told me that once one objective (delivery of the message) was achieved, then Haqqani would get explicit approval on the specifications of the operation to get the army down”, he added.Ijaz claimed that until that time President Zardari was not aware of how Haqqani would get the army down, and had general instructions to get the military chief back. He said that on May 10, he called Haqqani and informed him that three possible persons could deliver the message to Mullen. “Two have already backed out, as they wanted the letter on a letterhead and signed by President Zardari, and these two options have been excluded,” he recalled as having told Haqqani.

“The third one has agreed provided that it (the memo) had the authority of the president of Pakistan, to which Haqqani stated that he had sorted it out with the boss,” Ijaz claimed as having told Haqqani. “Immediately after I called James Jones I informed him that the message would be in writing and he (Haqqani) would get approval during the night. Haqqani again told me that he had sorted out with the boss, however, I spoke to James Jones and told him that authority would be solidified and made explicit during the night.

The conversation with James Jones concluded that I would be sending the memo within the next hour, but he would not forward the email to Mike Mullen as Haqqani is tweaking the memo. At 1:28am on May 10, I sent the final draft to James Jones from my email address in two files – one Word file and the other PDF file,” Ijaz submitted before the commission. He also produced a copy of the email sent to Jones.

He said that point six, which related to the US access to the widows of Osama bin Laden, was taken out from what turned out to be the final draft of the memorandum. On May 10, I sent a copy of the memo to James Jones. “In this email, I denoted Haqqani as ‘Baba’,” he further told the commission. Ijaz said the identity of James Jones was kept hidden in the email sent to Haqqani which contained the memo. “I did not want Haqqani to know who was helping me,” Ijaz added.

“I wanted to protect the identity of James Jones, and in my email, in which I forwarded the memo to Haqqani, I removed the address of Jones and instead inserted something else as secrecy. In addition, I made certain other modifications to the body text of the email to ensure that nothing could be traced back to Jones,” he added.

Continuing with his testimony, Ijaz said that James Jones was sceptical and surprised if anyone in Pakistan government could talk the matters mentioned in the memo. He said that on May 12, Haqqani informed him about the meeting between Mullen and Pakistani officials, and that a phone call could go out from the US president or Mike Mullen to “Pindi”. On communication with the Blackberry manufacturer, Research in Motion, for obtaining the record of the communication between him and Haqqani during a specific time period, Ijaz told the commission that he was unable to obtain the data. He said that he had already sent 12 emails to the commission which contained all the requests by him or his lawyer to the RIM for obtaining the data.

Haqqani’s lawyer Zahid Bukhari continued irritating the commission as well as Ijaz with his “unnecessary objections” to the proceedings. At one point, Ijaz got provoked when Bukhari objected to the proposal of Akram Sheikh that Ijaz should make a final request to the RIM to release the data. “I waived my privacy rights but Haqqani did not. Let the commission know on which grounds RIM declined the request. We tried in search of truth and he (Haqqani) has no interest in finding the truth,” Ijaz shouted, saying that after RIM’s refusal to release the data, the entire truth was in his Blackberry sets.

Ijaz told the commission that many messages were exchanged between him and Haqqani which he could send to the commission through email.He explained that the term “bad boys” in the messages referred to the chiefs of Pakistan Army and the Inter-Services Intelligence (ISI). He said that Haqqani had messaged that the US could get access to Osama bin Laden’s widows.

To Bukhari’s questions raised a day earlier about Ijaz’s faith, the Pakistani-American businessman categorically stated: “I am a Muslim.” He also recited the initial part of the first “Kalima” testifying Allah’s oneness to make Haqqani’s lawyer believe that he was a Muslim. However, Justice Isa asked him to keep his cool, as the opponent might provoke him to break his chain of thoughts.

Upon an objection raised by the attorney general, the commission observed that the Blackberry record would not be exhibited at that particular juncture. The AG was of the view that the electronic evidence was subject to security certification under Article 78-A of Qanoon-e-Shahadat. The commission directed the commission’s secretary to take prints of the electronic communication directly from Ijaz’s laptop computer. Mansoor Ijaz has almost finished his testimony, and the commission would continue its proceedings today. – PT

Govt ready to forgive and forget