Govt ready to forgive and forget 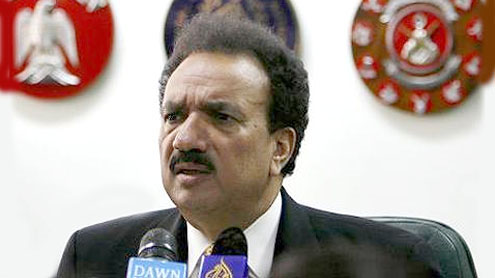 ISLAMABAD: In a major reconciliatory move, the government on Thursday announced to grant amnesty to Baloch rebels, including Brahamdagh Bugti, in view of the prevalent situation in Balochistan province.

Interior Minister Rehman Malik made the announcement as part of the government’s efforts to reconcile with them.“We will withdraw all cases against Baloch leaders, including Harbiyar Marri and Brahamdagh Bugti, but all of the leaders should return to Pakistan,” Malik said while talking to reporters after a meeting on Aghaz-e-Haqooq-e-Balochistan Package.

He told reporters that he had also met Harbiyar in London as some reconciliatory actions were needed to save the country, adding that he would himself welcome Baloch leaders on their return to Pakistan. “There has to be a political solution to the Balochistan issue and immediate steps have now become obligatory for the sake of the country,” said Malik.

The interior minister said the government could also not get due response from the provincial president of Jamhoori Watan Party (JWP), Shahzain Bugti and Bilal Bugti, regarding its offer made to them to nominate their leaders for talks with the government.He called upon the Baloch and national leadership to attend the government’s All-Parties Conference (APC) on Balochistan. However, Malik expressed dissatisfaction over some political parties’ opposition to the APC, saying that it had become a tradition for some political forces to always criticise the government.

To discuss the law and order in the country, particularly in Balochistan, Interior Minister Rehman Malik also called on Prime Minister Yousaf Raza Gilani.The interior minister briefed the prime minister about a bomb blast in Peshawar and reiterated the resolve of the democratic government to not get intimidated by cowardly acts of terrorism.The prime minister expressed his sympathies with the aggrieved families and directed law enforcement agencies to make relentless efforts to apprehend the culprits and bring them to justice.

Earlier during the meeting on Aghaz-e-Haqooq-e-Balochistan Package, deliberations were made on several recommendations for the welfare of Balochistan and its people.According to the press release issued by the Interior Ministry, 15,000 young graduates and post graduates from Balochistan should be given Rs 15,000/- per month internship stipend in the Prime Minister’s Internship for Balochistan programmed for working as school teachers in the province.

The handout stated that the federal government shall release Rs 4 billion to WAPDA on account of its share of subsidy for farmers of Balochistan, adding that 2,400 federal government jobs would be filled on merit with the assistance of MNAs and senators of Balochistan.To encourage representation of the government officials at the federal level, any officer coming to Islamabad on deputation would be awarded a higher post than his previous one.

It was also decided to double the number of Benazir Income Support Programme beneficiaries from 375,000 to 750,000 and the federal Levis force shall be increased by 3,000 through fresh recruitment. A proposal was also floated during the meeting that free education to current 150 brilliant students from Balochistan shall be increased to 500 in the next academic year and endowment fund of Rs 5 billion shall be created for its sustainability.

It was also said that the Capital Development Authority (CDA) shall give one suitable plot to the Balochistan government for construction of a students’ hostel and officers’ hostel in Islamabad.It was also decided that the Frontier Corp (FC) Balochistan would not move to any district without the permission of the Deputy Commissioner and no checkpost would be established by FC without permission of the Balochistan CM.It was also decided that the FC and Coast Guards would exercise powers under Customs Act and strictly in accordance with the law and keep their deployment restricted to within 10 Kms of the international border. – PT