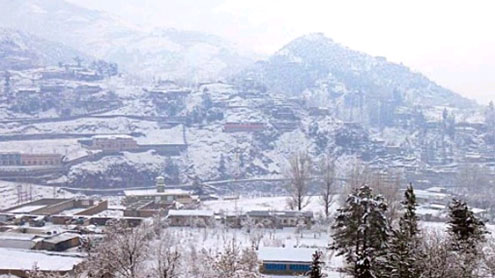 PESHAWAR/GILGIT: The first rain this winter brought an end to the persistent dry weather, on Saturday, with an increase in the intensity of cold and unusually heavy snowfall in hilly areas of Khyber-Pakhtunkhwa (K-P) and Federally Administered Tribal Areas.

With the advent of a moist and cold wave, most parts of K-P experienced chilly weather. Rains were particularly welcome because agriculturalists had to contend with water scarcity at the start of the wheat growing season.Residents of Mohmand Agency, Khyber Agency and Bajaur Agency faced hardships since snowfall led to the closure of roads. It was the heaviest spell of snowfall in a decade. Shortage of edible items in some areas was reported.

Heavy snowfall in Chitral and its surrounding areas has also disrupted   routine life and hundreds of passengers are wedged on Chitral-Dir Road on either side of the Lowari Tunnel. Parachinar remained the coldest with minus 12 degree Celsius as the minimum temperature recorded, while it was minus 8 in Skardu and minus 7 degree Celsius in Malam Jabba.According to the Met Office more rains and snowfall in Gilgit-Baltistan (G-B) and upper parts of K-P expected in the next 24 hours.

Fog descended on mountain peaks as well as upper G-B and triggered a wave of severe cold in the region, forcing people to remain indoors.There was reports of snowfall in some valleys including Qamari, Minimarg, Gultari, Yasin,Phandar, Imit, Tangir, Darel, Khanbari and dozens of villages in Baltistan. The mercury dropped further as fierce winds blew continuously the whole day.  Scheduled flights between Gilgit and Islamabad were suspended due to inclement weather.

Heavy snowfall attracted tourists to Landi Kotal, where peace has been marred by recent blasts and militancy. It snowed the whole night from Friday evening to Saturday morning, blanketing the entire town. Visitors were seen making snowmen and engaging in snowball fights.Khogakhel, Shaikh Mall Khel and Khyber Zakha Khel were covered with one-foot high snow, attracting tourists from Afghanistan, Peshawar and suburban areas. Bazaars and restaurants were crowded with customers.A tourist from Peshawar, Asad Qureshi told The Express Tribune that he had come to the border town just to enjoy the snow. He said a little attention by the authorities can turn Landi Kotal into a tourist attraction for domestic and foreign visitors. – Thetribune