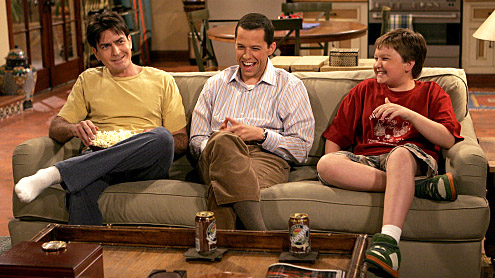 'Two and a Half Men' Adds a Little Lady

You see, because Angus T. Beefburger is leaving the show, as a regular anyway, the producers have decided to add a new young person character, this time a girl. What’s going to happen is that when Beefburger leaves, a girl in her late teens or early twenties is going to show up and reveal that she is the child of Charlie Harper, the character who was played by Charlie Sheen until Sheen left the show and the character was killed off.

Surprise! Of course she’ll quickly come to live with Charlie’s brother Alan and his new roommate Walden Schmidt, the dumb computer millionaire played by dumb computer millionaire Ashton Kutcher. So it will be Two Men and a Young Woman. Sounds kinky! Who will play this young lady? Well, Kaley Cuoco is booked, so not her. Does she have a sister? Someone go check to see if Kaley Cuoco has a younger sister. Because she’d probably be perfect.

The exciting TV news just keeps on coming. Assassin robot turned California governor Arnold Schwarzenegger has sold a bodybuilding drama called Pump to Showtime. The show will tell the story of the bodybuilding movement, through the eyes of a Los Angeles gym called Pump. So that could be exciting! To see everyone get jacked and ripped and cut and, I dare say, swol. I mean, the bodybuilding motif didn’t work so well for Pain & Gain, but maybe this will be different. And hey, there could be an acting role in there for Arnold’s son Patrick, himself something of a muscleman, if the Daily Mail is to be believed. Or it’s a chance for Vin Diesel to make a lot of television cameos. Either way, this could be interesting. Pump away, Showtime!

Speaking of Showtime, Pulitzer-winning playwright and celebrated Chicago actor Tracy Letts, who most recently made waves on Broadway in Who’s Afraid of Virginia Woolf, has been made a series regular on the network’s most acclaimed show, Homeland. He’ll play the senator in charge of the committee that’s investigating [SPOILER ALERT, YA DUMMIES] the big CIA bombing that happened in the season finale. So either Carrie will spar with him and try to kill him or she will sleep with him, right? Maybe both! Who knows with this increasingly nutty show. Seriously, what is this next season going to look like? Brody hiding in bushes?

Carrie explaining why she disappeared right after the bombing and now Brody is conveniently missing? Mandy Patinkin frowning at everything he can possibly frown at? I’m just not sure how the third season of this, let’s face it, rather silly show is going to work. But I’m excited to find out!The new Superman, Henry Cavill, is in talks to replace Tom Cruise in the Man from U.N.C.L.E. movie, which Cruise abruptly walked away from last week. Which is interesting. Cruise is, y’know, Tom Cruise, while Cavill is still a mostly unknown up-and-comer. I guess the producers of U.N.C.L.E. are hoping his big break will be more Michael Fassbender and less Brandon Routh. Only time will tell.

But look. Just look. How could this not all end well? Here is a new trailer for Percy Jackson: Sea of Monsters, the wholly unnecessary sequel to the ultimately unnecessary Percy Jackson and the Olympians: The Lightning Thief. The budget seems slashed here, with lesser stars (sorry, Tucci) playing the adult centaurs and whatnot, and the special effects having a distinctly less polished look. Not that Lightning Thief was some wonder to behold, but it certainly looked better than this. Ah well. I’m sure little ones will find some redeeming good in it. And slightly less little ones will contemplate Logan Lerman, trying to figure out how it’s all there and yet something’s just not quite right. Something for everyone! – YahooNews