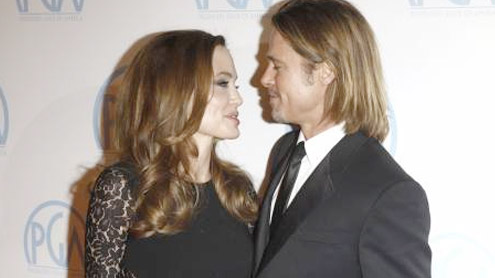 Angelina Jolie will miss her aunt’s funeral because it clashes with the premiere of Brad Pitt’s new movie World War Z.

The Salt actress – who recently revealed she underwent a double mastectomy after she was identified as carrying the BRCA1 cancer gene – lost her aunt Debbie Martin, 61, over the weekend following a battle with breast cancer but Angelina cannot make the funeral in San Diego on Sunday June 2 because she will be in London.

Debbie’s husband Ron told E! News: ‘We are making the final arrangements for the funeral as we speak. But we expect it to be this Sunday at noon at El Camino Memorial in Sorrento Valley near our home.”Angelina will be in London on Sunday so she won’t be able to attend but she has been in touch with us and with various other members of the family, which has obviously been lovely and has meant a lot to us.’Ron also revealed the family are hoping to start a charity to raise money for  BRCA genetic testing.

He said: ‘We are currently in the process of setting up a foundation in Debbie’s memory and we are hoping to raise money for women who can’t afford to get BRCA testing.’We are hoping to work with a charity called the Clearity Foundation so that every woman in America will have access to BRCA testing that could save her life – no matter how much money she has.’Martin, revealed that Debbie passed away early Sunday morning at 1:50 a.m.’Angelina has been in touch throughout the week and her brother Jamie has been with us, giving his support day by day,’ Ron told E! News.

‘They both loved Debbie very much and although Angie is not able to come right now she has sent her love and support which was very nice.’The 37-year-old actress shocked the world when she bravely revealed she had undergone a double mastectomy after being identified as carrying the BRCA1 cancer gene.Previously Bill said: ‘Debbie is the unsung heroine of this story because she was the first woman in the Bertrand family to attempt preventative surgery.’She has been a shining example to Angelina.’

‘We have seen Angelina a number of times since Debbie was diagnosed with breast cancer and Debbie and I were both very proud of her recent decision to have the double mastectomy and to do everything she can to keep her family from having to go through what we’ve been through,’ Ron said.’Angelina’s father Jon Voight has also been tremendously supportive – he came down to see Debbie last Sunday and spent the whole day, talking with her and sharing his love and I know Debbie really enjoyed seeing him and talking with him.’Debbie died at Palomar Hospital in Escondido, California, leaving her husband Ron and their two sons Chris and Cory Martin. – DailyMail

'Two and a Half Men' Adds a Little Lady