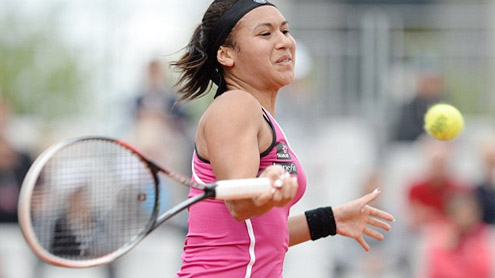 The British flag was lowered as far as the French Open singles was concerned when Heather Watson went out in the first round after a spirited battle on her return to action following a bout of glandular fever.

Playing her first match since March – when she was diagnosed being at the back end of the disease – Watson went down 6-4, 2-6, 6-4 in just under two hours to bring a swift end to the challenge from across the Channel this year in the absence of Andy Murray.It is the first time since 2007, when Murray was also injured and Tim Henman lost to a young Ernests Gulbis, that no British player has made it through to the second round of the clay court Grand Slam.If there was consolation in this particular case it was that Watson’s fighting qualities and fitness appear to have survived the condition which seems to trouble a worrying number of tennis players.

To the cheering approval of a large number of British supporters on Court No 6, an arena where she has won before, Watson mounted a comeback in the second set when it appeared that her legs were struggling through lack of matchplay.She will play in the mixed doubles here before turning her attention to grass, but her ranking will take a hit from its current position of 48 after making the second round last year.

The Channel Islander, who has just celebrated her 21st birthday, also has points to defend at Wimbledon but will be happy just to be back on the court.She made a strong start, but was then punished for some short second serves in the fifth game to go 3-2 down and could not retrieve the set. Hopes of an unlikely win were revived in the second when she discovered her range to rattle off the last four games with her opponent starting to lose her composure for the first time.Voegele then chose to go for a comfort break, as is so often seen in these circumstances, and that broke the momentum that Watson had built up, as she sat there for five minutes waiting to serve.

At 2-0 down it looked like it might unwind quickly but Watson dug in and had two points to get back on level terms for 4-4, both of which went begging, and Voegele, the world No 56, closed it out from there.It was a soberingly early end to British hopes which still rely on too few players at the big events, a situation that is often camouflaged by Murray’s impressive consistency at the Majors.The bad news appeared to be compounded as Laura Robson was set to officially pull out of the French Open doubles, in which she was due to participate with American Lisa Raymond, with a bad back that was said to have been troubling her prior to the match against Caroline Wozniacki.Robson is due to compete next at the AEGON Classic in Birmingham, beginning a week on Monday. – DailyMail