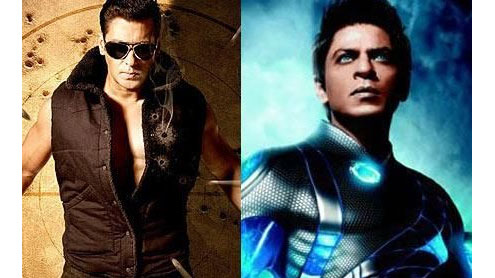 From real life sagas to sci-fi and experimental to sentimental dramas – Bollywood’s potpourri of hits offered a wide range of themes. Films like “No One Killed Jessica”, “Ra.One” and “Zindagi Na Milegi Dobara” not only satiated the moviegoer’s appetite but also yielded profits for the Hindi film industry.

Here IANS lists the top 10 movies of the year:

1. “Bodyguard”: Salman Khan and Kareena Kapoor’s “Bodyguard” broke the opening day records by earning Rs.22 crore on the first day. Although the story of the film, directed by Atul Agnihotri, didn’t have much to say, the music as well as the action sequences worked in its favour.

2. “Ra.One”: World class VFX, amazing graphics, innovative marketing, tie-ups with multiple brands and Shah Rukh Khan as the superhero made sci-fi thriller “Ra.One” a profitable venture. Another highlight of the film was its music, especially the song “Chamak challo” sung by international rapper Akon. And the marathon promotion by the superstar helped bring people to the theatres.

3. “The Dirty Picture”: Her sensuous look shocked, her itsy-bitsy clothes astonished and her double meaning dialogues left audiences gasping for breath, but all this nothwithstanding, Vidya Balan swept both the classes and the masses off their feet with her bold avatar in Ekta Kapoor’s “The Dirty Picture”.

An unofficial biopic of southern sex symbol Silk Smitha, the film broke the myth that only movies with “Khans” work at the box office.

4. “Ready”: Romantic comedies have been a staple of Hindi films and this year Salman Khan’s “Ready” used the recipe to earn profits. Shot in exotic locales of Thailand, director Anees Bazmee’s drama about mistaken identity saw Salman romancing Asin Thottumkal amid all the hotch-potch in their lives, thanks to their onscreen relatives.

5. “Zindagi Na Milegi Dobara”: Focussing on three bachelors dealing with their friendship and romance, the well-scripted film, with a resemblance to real life episodes, was supported by beautiful performances by the talented cast – Hrtihik Roshan, Abhay Deol, Farhan Akhtar, with Kalki Koechlin and Katrina Kaif as their love interests.

Kudos to director Zoya Akhtar for bringing liveliness, happiness and joyfulness with such deftness on screen through an adventurous road film mostly based in Spain.

6. “Singham”: An out-and-out action film, the success of “Singham” proves that there are takers for such films. Based on the “good wins over evil” theme, the actioner takes a dig at the corruption within the police department through two main characters – honest cop Ajay Devgn and Prakash Raj as a corrupt politician. Director Rohit Shetty’s film also marked southern actress Kajal Aggarwal’s debut in Bollywood.

7. “Rockstar”: Give him a good role and he can sink his teeth into it. Ranbir Kapoor proved that again by stepping into the shoes of a musician. From a cute and simple college boy to a crazy lover to a successful but cynical singer, the young actor proved his mettle in every frame. The film appealed despite a faulty script, which had too many loose ends. In short, it was Ranbir’s film, which launched American Pakistani model in the Bollywood business. Other high points of the movie were A.R. Rahman’s music and Mohit Chauhan’s singing.

8. “Mere Brother Ki Dulhan”: Not good, not bad – that is how Yash Raj Films’ “Mere Brother Ki Dulhan” could be described. Thanks to Imran Khan, Katrina Kaif and Pakistani singer-actor Ali Zaffar’s tangled love story woven against the backdrop a wedding, the romantic comedy managed to pull the crowds. The film got mixed reviews, but managed to enter the top grosser list of the year.

9. “Delhi Belly”: Replete with cuss words, weird situations, witty dialogues, the experimental movie in the English language targeted the urban audiences, who hailed this free will adult comedy as they identified with the characters of Imran Khan, Kunal Roy Kapoor and Vir Das in the movie. If director Abhinay Deo faced failure with “Game”, this film pulled him out of darkness and Aamir Khan once again proved that he has a knack for choosing the best scripts as a producer.

10. “Yamla Pagla Deewana”: After the 2007 release “Apne”, the Deol trio – Sunny, Bobby and Dharmendra – returned to the big screen with the comic caper “Yamla Pagla Deewana” by director Sameer Karnik. Though a small budget film, it received an overwhelming response. The impeccable comic timing between the father and sons struck a chord with the audiences.