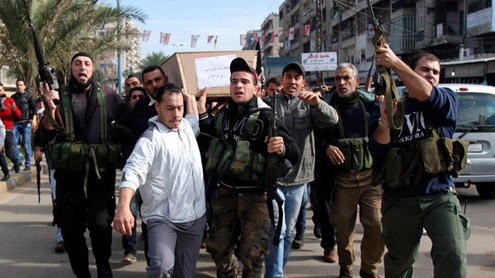 At least ten people, including a woman and an off-duty soldier, have been killed in two days of sectarian clashes in northern Lebanon linked to the war in neighbouring Syria, a security source said Sunday.

The fighting in the northern port city of Tripoli also wounded 49 people, including 11 soldiers, the source told AFP. On Sunday four people were killed, two of whom were in a truck when they were shot dead by a sniper, while the third was the off-duty soldier and the last victim a woman who died of injuries sustained the previous day. Also on Sunday, an explosion caused a three-storey building in the Alawite area of Jabal Mohsen to collapse, said the security source and an official from the area.

According to Abdel Latif Saleh, spokesman for the Arab Democratic Party, which supports Syria’s President Bashar al-Assad, “the blast came after militiamen from (the Sunni, anti-Assad) Bab el-Tebbaneh neighbourhood planted explosives in the building.”No one was injured, as the building was uninhabited. The developments come after a day of fierce clashes that lasted into Saturday night, leaving six dead. The fighting pits residents of the city’s Alawite Jabal Mohsen district against Sunni residents of the neighbouring Bab el-Tebbaneh. The security source said fires had broken out in buildings along the dividing line between the neighbourhoods as a result of the fierce clashes, during which rocket-propelled grenades were also used.

Tensions between the neighbouring areas date back to Lebanon’s 1975-1990 civil war but have been exacerbated by the conflict across the border in Syria, where Alawite President Bashar al-Assad is battling a Sunni-led uprising. The Lebanese army remained deployed in the northern city on Sunday, responding to sporadic sniper fire. A military source said soldiers had arrested four suspects, confiscated their weapons and taken them in for questioning. Among Saturday’s dead was 15-year-old Omar al-Haswani, who was killed inside the Luqman school, near Bab el-Tebbaneh.

Tensions have been running high in Tripoli since Thursday, when residents of Jabal Mohsen began flying Syrian flags to demonstrate their support for the Assad regime. In response, residents of neighbouring Bab el-Tebbaneh raised the flag favoured by rebels seeking the ouster of Assad. The same day, gunmen shot and wounded four Alawite workers in the city, prompting condemnation and demonstrations by Alawite residents. Meanwhile in southern Lebanon, a member of Palestinian movement Fatah was shot dead in the country’s largest camp for Palestinian refugees, an official told AFP. “Two men with their faces covered opened fire using machine guns at 25-year-old Fatah member Mohammad Saadi.

He has been confirmed dead,” said Maher Shabayta, a Fatah leader in the Ain al-Helweh camp. Speaking on condition of anonymity, another official said a second man, a 50-year-old civilian named Ibrahim Abdel Ghani, was killed when armed members of Saadi’s family took to the streets and started shooting randomly to protest his death. The deaths come two days after clashes pitting Fatah, the group that Palestinian president Mahmoud Abbas heads, against radical Islamists in the camp. -Dawn