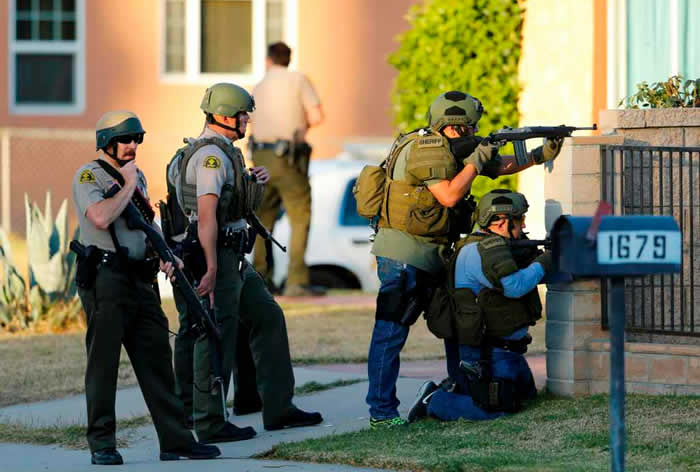 At least two heavily armed attackers opened fire on a banquet at a social services centre for the disabled Wednesday, killing 14 people and seriously wounding more than a dozen others in a precision assault that looked “as if they were on a mission,” authorities said.

Hours later, police hunting for the killers riddled a black SUV with gunfire in a shootout three kilometres from the late-morning carnage, and a man and woman with assault rifles, handguns and “assault-style clothing” were killed, San Bernardino Police Chief Jarrod Burguan said.

Police Chief Jarrod Burguan at a news briefing earlier said that as many as three suspects were believed to have made their getaway in a dark-coloured sport utility vehicle. The chief said it was possible that a third shooter remained at large and that there were other people “involved in the planning” of the crime. The police chief said 14 people were killed and 14 others wounded in the initial shooting spree, which unfolded at 11am on the campus of the Inland Regional Center, an agency that serves the developmentally disabled. Cervantes later revised the toll of wounded to 17. “We have no information at this point that this is terrorist-related, in the traditional sense that people may be thinking,” the police chief said.

“Obviously, at minimum, we have a domestic-type terrorist-type situation that occurred here.” The chief added he knew of no possible motive for the shooting spree. NBC News reported one of the three suspects was identified as Syed Farooq by multiple sources, but Reuters was not able to confirm that. A person by that name was listed on county documents as an employee of the San Bernardino County Environmental Health Department. That department had gathered on Wednesday for a holiday party at the shooting site.