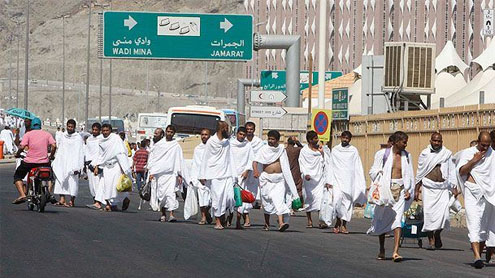 Hundreds of thousands of white-clad believers, in buses, cars and on foot and all of them chanting “Labbaik Allahumma Labbaik” (“Here I am, O Allah, here I am”), began their trek last night to the nearby tent city of Mina in the first leg of the annual pilgrimage.

Nearly 2 million pilgrims have come from abroad for what is described as the largest gathering of Muslims in the world. They will be joined by nearly 1 million from within Saudi Arabia, including a large number of expatriates.The weather was moderate with a mild and cool breeze blowing across the Mina valley.Saudi Arabia has left nothing to chance to ensure that pilgrims perform the arduous rituals with ease and comfort. Following instructions from Custodian of the Two Holy Mosques King Abdullah, all Haj-related ministries and security agencies have mobilized their resources in the service of the guests of Allah.

All Muslims are required to perform Haj at least once in their lifetimes if they have the means to do so. Pilgrims from nearly 150 countries are taking part in this year’s Haj. Among the countries that have sent the largest contingents of pilgrims are India, Egypt, Pakistan, Indonesia and Turkey.The Saudi religious authorities have announced that the standing on the Mount of Arafat in prayer by pilgrims, the high point of the annual pilgrimage, will take place tomorrow.

The following day will be Eid Al-Adha, the feast of the sacrifice, when Muslims worldwide slaughter lambs, goats and camels to mark Prophet Ibrahim’s readiness to sacrifice his son Ismail upon instructions from Allah.Many pilgrims began leaving for Mina last night after circumambulating the Holy Kaaba, the first house of worship on Earth, built by Adam. Prophet Ibrahim and his son Ismail rebuilt it some 5,000 years ago. Most Haj rituals are related to Prophet Ibrahim, his wife Hager and Ismail, and thus reflect the unity of humanity.

The whole atmosphere in and around the Grand Mosque yesterday was charged with piety and religious fervor and the pilgrims, men, women and children, were speaking only one language — the language of the Holy Qur’an. There were tears of joy in their eyes.“You might be rich and famous, with everything at your beck and call, but unless He gives a call, you cannot perform Haj,” said Zainul Abedeen, from Khartoum, Sudan. “O Allah, grant victory to Muslims wherever they are.”

The government has given top priority to the security and safety of pilgrims and has deployed thousands of security forces in Makkah, Mina, Arafat and Muzdalifah, all cities within a radius of 10 kilometers, to ensure a safe and secure Haj for the guests of God. Haj is one the five major pillars, or tenets, of Islam that followers of the religion must abide by. The others are the Shahadah, the declaration of the faith; Salah, the five daily prayers; Zakah or mandatory giving of a portion of a person’s wealth to the needy; and Saum or fasting during the month of Ramadan.

“Unity is essential to show practically that Islam is valid for all places and all times until the Day of Judgment,” said Mustafa Ismail, an Indian pilgrim. “It is only with unity that we will be able to rectify the image of Islam and Muslims.”The pilgrims will camp in Mina today praying to Allah for forgiveness and solace before leaving for the plains of Arafat tomorrow.“This is a dream come true for me.

Each year I saved money to come on this journey,” said Saeed Jabara, an Egyptian pilgrim. “Now that day has arrived and I’m among millions of Muslims who have gathered here to perform the pilgrimage.”The number of checkpoints on all roads leading into Makkah has increased enormously. Security forces were checking each and every vehicle. Those who did not have the mandatory Haj permits were turned away to avoid overcrowding at the holy sites. – Arabnews