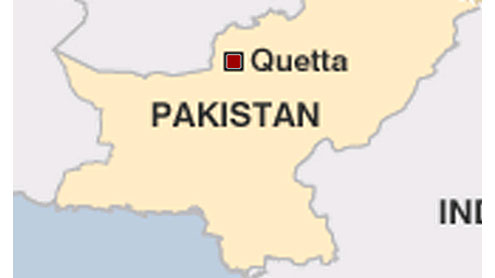 QUETTA: At least three people were gunned down in two separate incidents of firing in Khuzdar and Turbat in Balochistan on Tuesday.

At least two people were gunned down in Civil Colony locality of main Khuzdar city on Tuesday. According to a Khuzdar police official, unidentified armed men riding a motorcycle opened fire in the Civil Colony. Resultantly two people were killed on the spot. Police rushed to the crime scene soon after the incident and cordoned off the area. The deceased were taken to the district headquarters hospital for autopsy. They were identified as Muhammad Qasim and Eid Mohammad.

“The motive behind the killing could not be known,” the policeman said, adding that investigations were underway. The Khuzdar district had been closed for a month because of bad law and order situation, and the local people have been facing difficulties leading a normal life. The journalists of Khuzdar district have refused to work and locked the Khuzdar Press Club.

Meanwhile, a trader was gunned down in Turbat city on Tuesday. According to the police, well-known trader Khalid Musa was at his shop when armed men came there and opened fire, killing him instantly. Police rushed to the spot soon after the incident and the body was shifted to hospital for autopsy. A case has been registered against the killers and investigation is underway. – Dailytimes