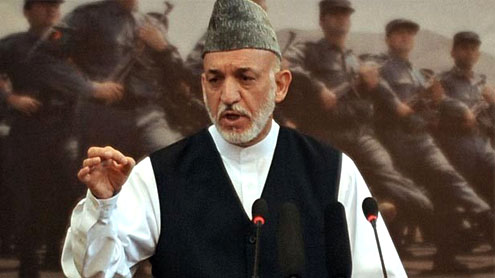 KABUL: Afghan President Hamid Karzai has warned of possible problems ahead over the sensitive issue of immunity from prosecution for any American or Nato soldiers deployed in the country after 2014.
The US-led Nato force of more than 100,000 troops is due to end combat operations at the end of that year, but thousands of soldiers are expected to remain in Afghanistan to train and assist Afghan forces.In Iraq, Washington pulled out all its troops, leaving no residual force, after failing to get Baghdad to grant its soldiers immunity from prosecution in local courts.

Karzai said in a statement that he had told visiting Nato Secretary-General Anders Fogh Rasmussen during talks in Kabul on Thursday that the Afghan people might not “permit their government to grant immunity”.This would happen “if the war and insecurities continue in Afghanistan, Afghan borders are not protected, and the immunity for foreign forces comes on top of these issues”, he said.

The United States and Afghanistan have signed a strategic partnership treaty governing relations after the 2014 pull-out, but immunity is subject to separate negotiations.The issue was complicated after a murderous rampage in March by a US soldier who allegedly killed 17 Afghan villagers in their homes at night before being flown out of the country.Afghan politicians had called for him to be handed over by the Americans to face justice locally.

Other issues such as the burning of Qurans at an American base and the deaths of civilians at the hands of Nato forces, mainly through air strikes, have also caused deep resentment among Afghans.“Despite the fact our people are poor and living in poverty, they first want respect for national sovereignty and security for their country and children,” Karzai said.

“Thus the legal status of foreign forces after 2014 is dependent on ensuring security, stability and protecting Afghanistan’s borders.”Rasmussen had earlier told a joint news conference with Karzai that Nato plans to establish a new mission in Afghanistan after 2014.“This will not be a combat mission, it will focus on training, advice and assistance and we are now planning for this mission,” he said. – Dawn