He spent the whole summer seemingly trying to find love on The Bachelor as 24 different women vied for his affections.

And while Spencer Matthews has since been seen on the new series of Made In Chelsea desperately trying to win back on/off girlfriend Louise Thompson, she has so far remained tight-lipped.But now the pretty brunette has finally opened up about seeing her partner on the TV show – and revealed the truth behind their relationship.Many fans were left confused when Spencer appeared on The Bachelor over the status of his relationship with Louise.

Speculation rocketed when winner of the programme, Khloe Evans, was spotted kissing The Only Way Is Essex’s Tom Pearce during a night out before The Bachelor had even ended.But now Louise has opened up to Loaded magazine to reveal she knew about Spencer’s plans to be on the show all along and was in fact still involved with him.Appearing in a series of sexy and revealing underwear shots next to the interview, Thompson explained that when she rekindled her romance with Matthews on MIC’s last series he had already signed up to The Bachelor. 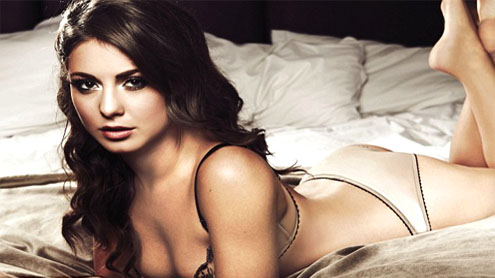 She didn’t want to get in the way of his TV deal so instead decided to trust him and stay away from the French set while he pretended to try and find romance – although they did succumb to late night phone calls to stay in touch.Louise told this month’s Loaded: ‘I would have gone out to visit him if I had been allowed to. I thought it was a bit unfair considering Hugo and some of our other good friends got to see him and make an appearance on the show, but I could not.’Spencer actually advised me not to watch the show because I think he knew it wouldn’t be nice.

I watched a few episodes just to see how he came across and was glad that he was such a lovely and genuine person – it could have been worse because I know the way shows edit things.’I found it funny watching him because although we spoke on the phone a lot, it was nice seeing his face and his silly charming ways. The time he spent filming went quite quickly because I went to Mexico and a few festivals in Croatia.’

Spencer and Louise have since been seen on the new series of Made In Chelsea rekindling their relationship.And Louise is adamant they’re closer than ever: ‘I’m just happy to have him back. I think if he had ‘found love’ on the show it would have been a bit of a kick in the face because he would have chosen them over me – but deep down I knew that it was never going to happen.’A lot of people speculate about Spencer jumping from Made In Chelsea to The Bachelor and back to Made In Chelsea, and have referred to me as a ‘doormat’ for putting up with it. This couldn’t be further from the truth.

‘I understand the nature of reality television, the way it is edited and its attempts to make believers feel that what they’re investing their time in is as accurate as possible. But I think it’s absurd for people to comment on relationships without meeting either of the people. Only the people that meet either of us in person understand the truth.’

Louise, who shows off the taut stomach and impressive looks which bagged Spencer in the first place in the lingerie shoot, added: ‘Spencer has never f**ked me over and we have an incredibly honest relationship. We’re best friends – it’s not like I’m afraid to stand up to him.’If I don’t like something that he does I’ll tell him, and he listens to my opinions. He might have done things that upset me in the past but he’s changed a lot.’Although an agent for Spencer told the magazine that Spencer was single during filming of The Bachelor. – Dailymail