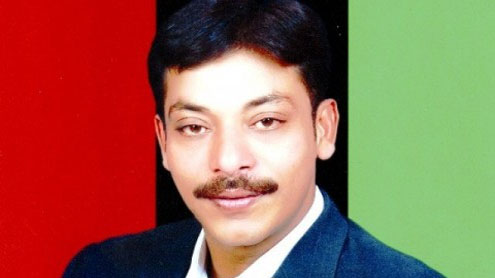 ISLAMABAD: The enthusiastic practitioner of ‘whatever it takes’ politics, PPP Senator Faisal Raza Abidi has once again demanded resignation of Chief Justice of Pakistan Iftikhar Muhammad Chaudhry, levelling at him fieriest accusations – of prejudice, victimisation and violation of oath.

Abidi, who used to complain about not being given ‘enough time’ to speak his heart at the floor of the House, was given well over half-an-hour on Thursday by Senate Deputy Chairman, who was conducting the proceedings of this one of the most prestigious forums of the country.Abidi came to the House with six cartons filled with bundles of files and documents – which, according to him, were full of evidences against the chief justice and his son Arsalan Iftikhar Chaudhry – which he later distributed among the legislators, except those belonging to the PML-N, who left the House soon after the chair gave floor to him.Abidi claimed that standard operating procedures (SOPs) of the Supreme Judicial Council (SJC) allow anyone including him (Abidi) to level allegations against any of the superior court judges including the chief justice through media or written complaints.

“It was the responsibility of the SJC to immediately convene meeting to take notice of my complaint, but instead I was barred to participate in any (TV) current affairs program deliberately upon the directions of the CJP and (this way, I am) being victimised,” he alleged.He said it all had been done because the CJP is the chairman of the SJC. He said in the name of probe into a hate message campaign, the FIA and police was tasked by the CJP to investigate him (Abidi), contrary to the fact he (CJP) had shown lack of confidence in both entities when they were probing the case of his son, Arsalan Chaudhry.Abidi also questioned the use of Supreme Court’s official letterhead for issuing him a notice on his allegedly circulating a text message against the CJP’s family.

“The CJP misused the SC letterhead, violating his oath of office as the issue had nothing to do with the apex court dignity,” he maintained.He said during his tenure the CJP took unnecessary suo moto notices, which, he said, tantamount to disgracing the institution of judiciary. “A policy of pick and choose in terms of cases was adopted by the CJP and cases pertaining to PPP government were entertained (on priority) in a bid to derail the government,” he said.

He alleged that the CJP was not interested in taking up any other case but those which result in humiliation of the PPP.The senator also declared that the CJP misused the bylaws of the House Building Finance Corporation (HBFC) by using loans meant for construing houses on his son’s wedding ceremony.

“This is what the CJP himself confirmed – that he’d no money and he obtained loans from the HBFC to hold his son’s Walima – violating his oath despite holding the top judicial post,” he said.He said the CJP had not only violated his oath but also the code of conduct and SOPs of the Supreme Judicial Council. He also claimed that the CJP was aware of his son’s activities as he was operating his company from the official residence of the CJP.

Abidi said if he would not be provided justice, he would “take his movement to the roads”.Earlier, taking part in the debate on law and order situation in the country with particular reference to violence in Balochistan, PPP Senator Mian Raza Rabbani came up with his five-point plan, which according to him would pave way to ease tension in Balochistan, if implemented.

Rabbani called for immediate implementation of ‘Aghaz-e-Haqooq-e-Balochistan’ development package and grant of complete provincial autonomy to the province as per spirit of the 18th Constitutional Amendment. He said the FC should be made answerable directly to the chief minister of the province.

“In near past it was claimed that FC was given under the aegis of CM but the claim turned out to be false soon after the announcement,” Rabbani said, adding that to achieve appropriate results “we need to curtail the unlimited powers of the FC”.Rabbani said the federal government should come forward with some acceptable solution to the issue of missing persons which he said was the core issue.

He said the government should ensure free, fair and transparent general elections in the province in future rather than hand-picking politicians, as was done in the past elections.Rabbani said suggested that recommendations of the Cabinet Committee on Balochistan should be made public at the earliest and it should be discussed on the floor of the House. He also said that Balochistan situation needs purely a political solution. “It’s a defining moment for the federation.

Let’s play our due role so that we could not be held guilty in the eyes of future generations,” Rabbani said.Earlier, painting a gloomy picture of Balochsitan’s second biggest city, Khuzdar, Senator Mir Hasil Bazinjo of National Party Balochistan said that from August 13 to October 18 the city witnessed routine life only for eight days while for rest of the days, it remained virtually closed.

During the same period, some 45 people were killed in the area who included politicians and their relatives, student leaders and common men, he said. “Every well-to-do citizen of Khuzdar irrespective of his/her ethnic or religious affiliation is migrating from the city to some safer place,” Mir said. He said markets were closed and the situation had forced the people to buy daily commodities from adjoining cities.

He said city houses some 5,000 daily wagers, who are now left at the mercy of God.He said after loosing hope of any sort of help from the provincial and federal governments, the Army and the intelligence agencies, the other day residents of Khuzdar held collective pray which was participated by some 7500 people.

Mir Hasil said if the issue was not given due attention by terming it a provincial problem than the situation would reach to a point of no return. He said residents of the area caught several persons red-handed while committing crimes including murders but administration let them go upon the request of intelligence agencies, who claimed the criminal/s was their operative.Upon that Interior Minister Rehman Malik suggested formation of a committee under the chairmanship of Mir Hasil Bazinjo to ascertain the situation of District Khuzdar. “I will personally assist this committee where district Khuzdar administration would be summoned. If they were found involve in some wrongdoing they would be punished,” Malik said.

Haji Adeel of ANP said country was witnessing the same situation in Balochistan as was experienced before the separation of East Pakistan.Two lawmakers from the treasury benches Thursday staged a token walkout from the Senate against the indifferent attitude of the government for not providing the copy of the detailed agreement to the House that was made between the government and management of Karachi Electric Supply Company (KESC) at the time of latter’s privatization.

During the question hour session, PPP stalwart Mian Raza Rabbani said that an amended portion of detailed agreement that was made by he government with the private company at the time of its privatization of KESC had been provided to the House. He said a copy of the amended agreement that mentioned only the amendments made in 2009 had been provided to the House and Parliament had been misguided.

First of all, Chairman Senate Nayyer Hussain Bokhari had pointed out the flaw in the record provided to the House.State Minister for Water and Power Tasneem Ahmed Qureshi remarked that the copy of the agreement could be sought from the KESC management. The chair said that the agreement was done between government and the KESC and the government should have its own copy.

Minister for Water and Power while replying the question of Shahi Syed of MQM had informed the House that no employee of KESC was compulsory retired, according to the Voluntary Separation Scheme of non-core staff, which had no effect on power generation, transmission and distribution. Shai Sahi of ANP also rejected the reply of the Water and Power Minister after Mian Raza Rabbani and Syed staged a token walkout form the House for not providing the detailed copy of the agreement to the House. At the end, the chair ruled that original document should be produced before the House. – Nation