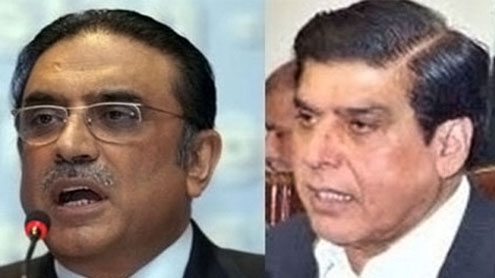 ISLAMABAD: Prime Minister Raja Pervaiz Ashraf and President Asif Ali Zardari have agreed that no new military operation would be launched until taking onboard the political and military leadership and all the other stakeholders, sources said.

At a meeting held at the Aiwan-e-Sadr, they exchanged views on host of issues, including the much-talked-about military operation in North Waziristan. Sources said that the prime minister also apprised the president about his talks with the Kuwaiti leadership and other international leaders.The two also discussed situation in Balochistan, by-polls and consultation between the government and the opposition regarding legislation on certain bills, the sources said.

President Zardari remarked during the meeting that PPP-led government in line with party policy of national reconciliation respects the national institutions and was against any kind of confrontation, the added.Meanwhile, in a message issued Thursday on the 5th anniversary of Karsaz incident, President Asif Ali Zardari, who is also Co-Chairman Pakistan People’s Party, said the parliament represents the will of the people and it is a shield against dictatorship.

He said, “Let us also re-dedicate ourselves to fighting extremism as well as the new forms and manifestations of dictatorship. Let us reiterate our resolve to strengthen the parliament.” He stressed to stand up to all those who perceiving the parliament as a threat to their dictatorial ambitions, openly or secretly, seek to undermine it.The President said the 18th day of October is an occasion to pay homage to the memories of those brave sons and daughters of the nation who laid down their lives and suffered immeasurably in the cause of democracy and fighting against extremism.

He recalled that on this day, five years ago when Benazir Bhutto returned to Pakistan from self-exile to lead the “fight against dictatorship and militancy”, her caravan was attacked by the militants. “On this day, we pledge to continue her mission to banish extremism and root out dictatorship in all its forms and manifestations,” he said.President Zardari said the phase of the journey to oust dictatorship that began on October 18, 2007, achieved a milestone on August 18, 2008, when the dictator was sent home packing.

“However, the dictatorial mindset still appears to rear its ugly head occasionally by assaulting the parliament, the voice and the will of the people, employing different ways and different methods.”He said the fight against this dictatorial mindset must also continue. No one will be allowed to assault the parliament, he said, adding, “Let there be no doubt or mistake about it.” The president said the extremists and militants who could not stand the power of Benazir’s call, are continuing their attacks on the progressive and democratic forces behind the facade of religion.He mentioned the recent cowardly attack on Malala, Kainat and Shazia and said it was a proof yet again of the threats from the extremists.

“The battle lines that were drawn on this fateful day in 2007 have sharpened. The battle must continue till it is won,” he added.He saluted the courage, devotion and loyalty of “martyrs and fans of democracy” who laid down their lives or were wounded while protecting Benazir. “They are the strength of the nation and, indeed, our national heroes and heroines,” he said. He called upon all political workers and the nation to remember them in their prayers. “Let us also remember in our prayers the personnel of the Armed Forces, civil law enforcing agencies and the people who have made untold sacrifices in the fight against extremism,” he said. – Nation