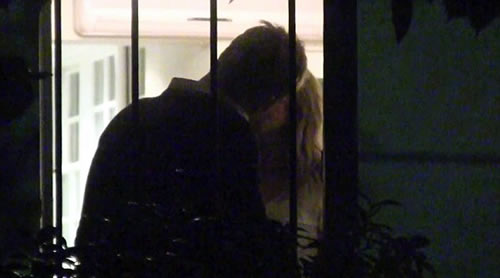 He has vehemently denied claims he’s dating former Playboy cover girl Emily Scott, repeatedly claiming they are ‘just good friends’. But Shane Warne will have a hard time continuing to assert his single status after intimate images emerged of him kissing the buxom blonde as he bid her farewell late on Thursday night.

Pictured in a lingering embrace, the cricketing legend is seen planting a tender kiss on his rumoured love’s lips as he stands in the doorway of her Sydney home. Earlier that morning, the 44-year-old appeared on breakfast television to once again deny any romantic involvement between the pair. The images suggest differently however, with Shane Warne appearing very affectionate towards the model and one-time reality star as he caressed her cheeks and gently tucked her hair behind her ears. Photographers at the scene questioned the couple about their relationship but they refused to comment. Instead taking to Twitter to express her emotion, Emily wrote: ‘Feelamazing’. It was a fond farewell for the couple who are currently spending time apart as Shane Warne fulfills his commentating duties on the England versus Sri Lanka first Test in London.

Emily Scott, who met up with friends after her rendezvous with the spin bowler, has since flown to Tokyo where she is thought to be committed to DJing gigs. A day after the affectionate display, the Shane Warne again attempted to deny any involvement writing on Twitter: ‘We’re good friends. Both single and intent to keep it that way, end of story. If and when I’m ever in a relationship, I will let you know!!’ Emily, who has featured on the cover of a series of men’s magazines in the past, penned an almost identical message, writing: ‘We’re good friends. Both single and intend to keep it like that Enjoying friendships’ on Friday. The couple first set tongues wagging when they were seen cuddling up to one another at boxer Jeff Fenech’s 50th birthday party a fortnight ago.

They had previously been pictured together at a Full Moon party held at Melbourne’s Crown Casino in the cricketer’s honour. Emily had been hired to DJ at the event which was designed to introduce Shane Warne to the city’s most eligible bachelorhood. The notorious lothario later sent his new flame a bouquet of red and white roses for her 31st birthday, sending her an equally affectionate message via social media. Happy birthday beautiful girl, hope you have an awesome day and get spoiled rotten,’ he wrote on Twitter, ‘Sending big cuddles and kisses,’ he wrote, adding an emoticon of a pair of red kissing lips.’ However the Australian international, who called off his engagement to British actress and model Elizabeth Hurley last year, was quick to deny the romance when he appeared on Sunrise on Friday.

Speaking to presenters David Koch and Samantha Armytage, the spin bowler said he would happily talk openly about a new love in his life if there was one. ‘I’ve known Emily for eight years. She’s a wonderful lady, we’ve been friends for eight years. We caught up the other day at the Full Moon party which was a bit of fun.  ‘I was in Sydney and I was going to Jeff Fenech’s 50th and I just said, “Do you want to come along?”‘ ‘She came along and suddenly I started dating her, but we’re just friends. ‘If I start dating someone, I know it’s a fascination of everyone but if I start dating someone I’ll let you know,’ he said. -dailymail