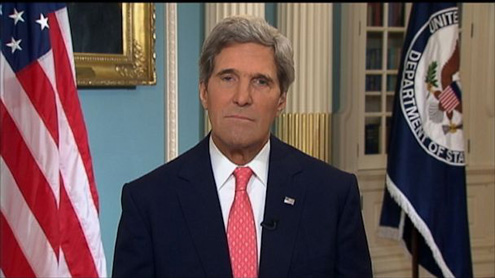 Israeli Prime Minister Benjamin Netanyahu is campaigning against what he says is a “bad agreement” that does not require Iran to dismantle any of its nuclear activities. With international nuclear negotiators reconvening in Geneva this week, Kerry says they remain united in ensuring that Iran never gets an atomic bomb. “We all agree – all of us – that there must be a verifiable, certain, fail-safe process by which the guarantee of not getting a nuclear weapon is clear to all,” he said.

“That means our friends in Israel. That means our friends in the region. And that of course means all of us here in the United States and the United States Congress.” A so-called “first step” agreement with Iran to pause its nuclear program and allow for talks on a longer-term agreement faces opposition in Israel and from some in the U.S. Congress. Prime Minister Netanyahu told his cabinet Sunday that it is a “bad agreement.”

He said tougher economic pressure of more sanctions “will be able to achieve the much-better result of a peaceful, diplomatic solution.” Israel has long threatened to attack Iran to prevent it from developing an atomic bomb. Iran says it is not seeking such weapons. But parts of its program go beyond what experts say is needed for nuclear power and research. Speaking to reporters following talks with Turkish Foreign Minister Ahmed Davutoglu, Kerry said he has great respect for Prime Minister Netanyahu’s concerns about Israeli security.

“Nothing that we are doing here, in my judgment, will put Israel at any additional risk. In fact, let me make this clear. We believe it reduces risk,” he said. The United States says it respects Iran’s right to conduct a civilian nuclear program, a position that Davutoglu says is shared by the government in Ankara. “As Turkey, we don’t want to see any nuclear weapon in the region.

We don’t want any state obtaining nuclear weapons. But at the same time we are in favor of peaceful access of nuclear technology,” said Davutoglu. In their talks, Kerry and Davutoglu also discussed Syria’s civil war, sectarian violence in Iraq, Israeli-Palestinian peace talks, domestic reforms in Turkey, and political divisions in Cyprus and in Nagorno-Karabakh. -Voanews