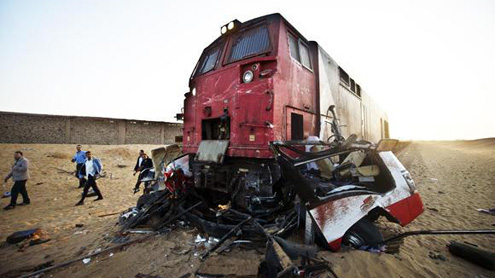 Egyptian officials say the death toll from a train crash south of Cairo has risen to 26, after two of the injured died in hospital.

The train slammed into at least three vehicles, including a truck, crossing the tracks early on Monday near the village of Dahshur. Most of the dead and injured were family members returning from a wedding in Cairo.

The head of Egypt’s emergency services, Ahmed el-Ansari, says 28 people remained in hospital, mostly with fractures, crush injuries and lost body parts. Egypt is notorious for train collisions and has a poor safety record blamed on decades of badly maintained equipment. A year ago, a train crashed into a bus, killing 51 school children in southern Egypt. -Arabnews