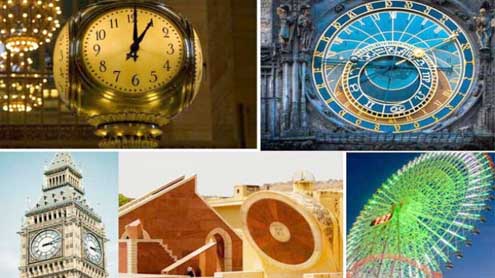 It may be a chilly spring in the Northern Hemisphere and a scorching autumn in Southern Hemisphere countries like Australia, but time is marching on as clocks are changed across the planet.

Europe and North America have already sprung forward to daylight savings time and Southern Hemisphere countries are falling back to standard time.That’s why online travel consultants Cheapflights.com figure it’s a great time to celebrate their list of the Top 10 clocks around the world. Reuters has not endorsed this list: 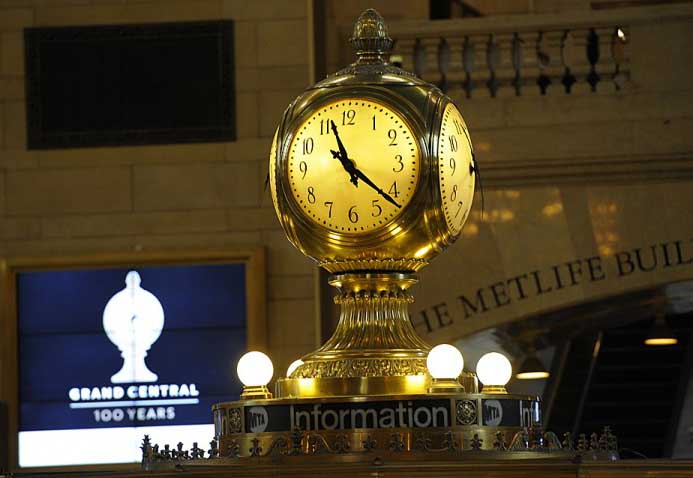 This timekeeper, which sits atop the information booth in Grand Central Station’s main concourse, just rang in its 100th birthday (that’s 73,000 rotations of those hands in case you’re counting). Featured in plenty of postcards, Hollywood blockbusters and real-life marriage proposals, the timepiece is topped with a compass and was originally built by Connecticut-based Seth Thomas Clock Company. The clock’s four faces are made of opal, surrounded by brass and illuminated by lights, making it somewhat of a beacon amid the crowd of hurried passengers darting toward train gates. “Meet me under the clock” – a phrase uttered by countless movie stars and punctual train passengers – is a household saying in this city, understood by residents and tourists alike. 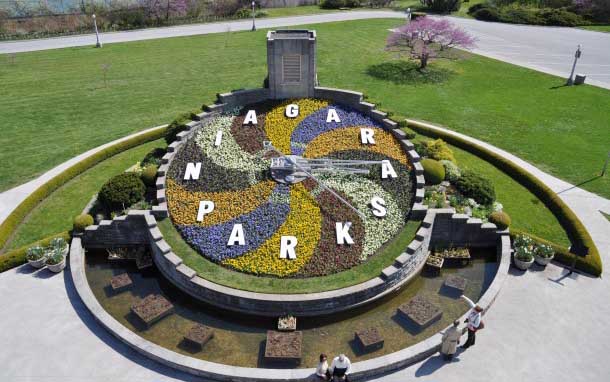 The Floral Clock does more than keep time – it keeps changing. Inspired by a similar clock in the Princes Street Gardens in Edinburgh, the clock was built in 1950 by Ontario Hydro and is the subject of almost as many photos as its high-profile neighbor – Niagara Falls. Its 40-foot face features 15,000 to 20,000 seasonal plants and flowers, arranged in an intricate design that changes twice a year. The Floral Clock sits on top of its mechanism, motor and power source, and is regularly inspected for accuracy. It’s accompanied by chimes from the tower at the back of the display, which also houses photos of nearly every floral design that has adorned the clock’s face. The timepiece features hands made of stainless steel tubing that weigh an impressive 1,250 pounds, and a water garden at the base of the clock filled with coins from wish-makers. 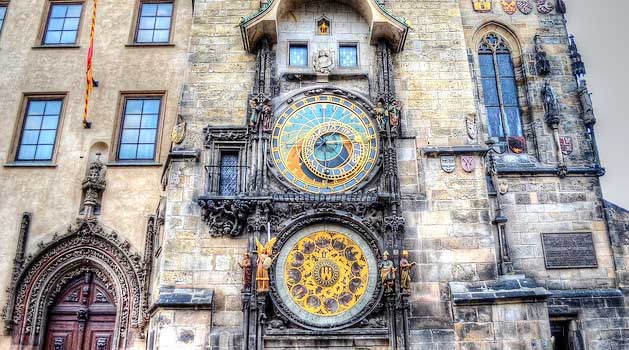 This medieval astronomical clock was installed in 1410 and is situated on the southern wall of the Old Town City Hall in Prague’s Old Town Square. Far from a traditional timepiece, the clock has an astronomical dial that shows the position of the sun and moon, and a calendar dial marking the date, which displays medallions of each zodiac sign representing the months of the year. Each hour, on the hour, wooden figures of the 12 apostles and other sculptures move through a window above the astronomical dial. The structure is thought to be the third oldest astronomical clock in the world and the oldest one still operating. The unique figurine show makes this a popular stop for visitors. 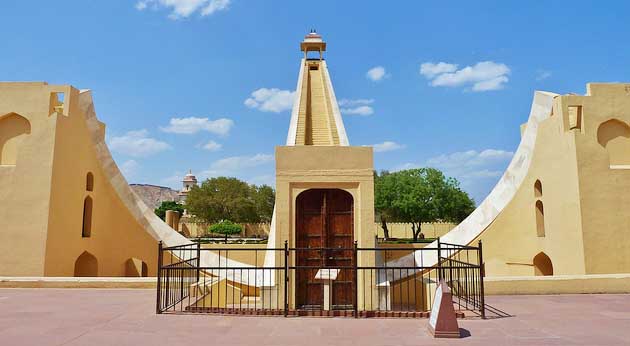 Though not exactly a clock, the Samrat Yantra – or supreme instrument – is the largest sundial in the world, measuring more than 88 feet in height. Made of marble and local stone with a gnomon that stands at 90 feet, this time-keeping attraction can tell accurate time, with just a two-second margin of error, day or night. The sundial and the observatory where it’s located were commissioned in 1728 by the Maharaja Sawai Jai Singh II. The movement of a shadow cast on the sundial is highly visible, as it shifts at a rate of six centimeters per minute. Observers can climb a flight of stairs on the gnomon to check the time from above. 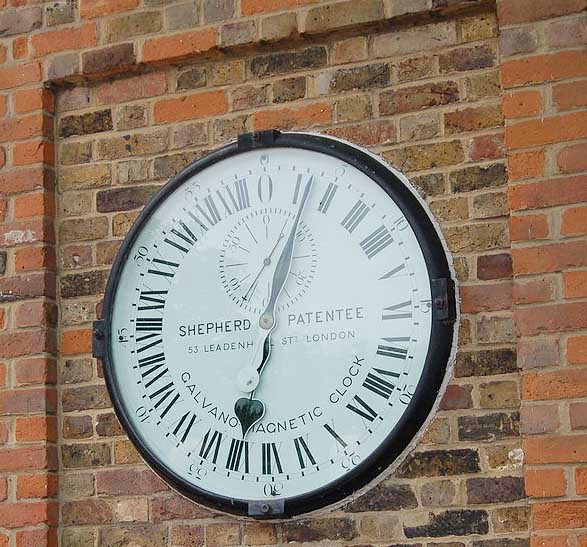 This timepiece is the public face of Greenwich Mean Time and serves as a symbol of standardized time keeping. The clock is mounted on the wall outside the gate of the Royal Greenwich Observatory, which is home to the Greenwich Meridian Line, marking the Prime Meridian of the World at zero degrees longitude. All other locations on Earth are measured using this line as a reference point. Installed by Charles Shepherd in 1852, the clock features the 24-hour analogue dial and was an early example of an electric clock. Controlled by a master clock inside the building, it’s part of a series of timepieces that first operated by sending electrical signals to a clock at London Bridge, which then transferred pulses to other clocks throughout England. 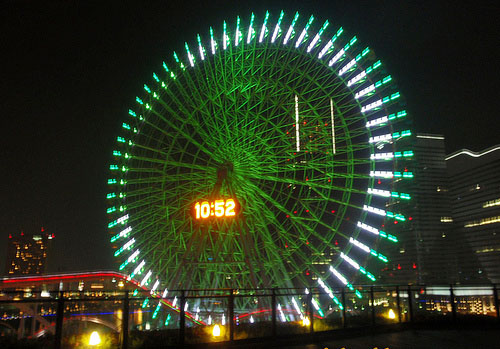 This digital timekeeper brings new meaning to the age old act of “rocking around the clock.” Situated on a giant ferris wheel – once the largest ferris wheel in the world – at Yokohama Cosmo World, Cosmo Clock 21 is the world’s largest clock standing at 369 feet tall. This carnival ride-clock combo was originally built for a 1989 exposition and still transforms into a light show of sorts at night with striking patterns of neon lights moving along its spokes. And, yes, you can in fact rock around this clock; the ferris wheel has 60 seats and can hold about 480 people at a time. One rotation takes 15 minutes (timed to the millisecond) and gives passengers a panoramic view of Yokohama.

This ticker takes top place when it comes to many world records. Completed in 2011, it’s now the tallest clock tower in the world (towering almost 2,000 feet over the holy mosque of Mecca), houses one of the tallest hotels in the world (Fairmont’s 76-story Makkah Clock Royal Tower), and boasts the world’s largest clock face (140 feet wide). A spire on top of the clock also makes this the second tallest building in the world, outdone only by Burj Khalifa in Dubai. The four clock faces shine green at night, and are reportedly visible from about 15 miles away. But telling time isn’t this clock’s only task – it also marks daily prayers with calls announced to the Muslim world from the tower’s loudspeakers that are audible four miles away. 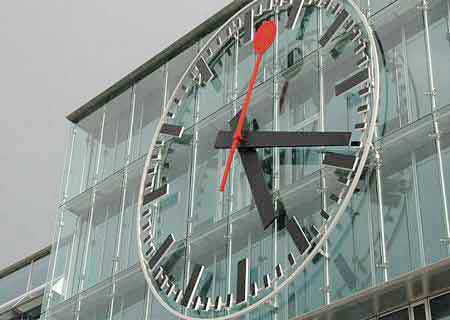 When you visit the Cevahir Shopping Center, don’t forget to look up. Situated on the nearly 27,000 square feet of transparent ceiling is the second largest clock in the world. The face of the timepiece measures more than 118 feet in diameter and features a mesmerizing geometric pattern. Each digit displayed – only the three, six, nine and 12 – stands at 10 feet tall. Every year, millions of visitors flock to the mall that houses the clock – also known as ili Culture and Trade Center. The shopping centre opened in 2005 and is the largest shopping mall in Europe with multiple performance spaces as well as a small roller coaster inside.

No list of clocks would be complete without mention of the Great Clock that’s part of Big Ben. Attached to the Palace of Westminster, this famous clock tower was installed in 1859 and remains one of London’s most popular attractions. Whether you’re walking by or taking a spin on the London Eye, simply catching a glimpse of Big Ben’s elaborate, majestic design and hearing the Great Bell chime on time make for an awe-inspiring experience. The name “Big Ben” technically refers specifically to the Great Bell inside the tower, but often serves as a catch-all term for the clock, bell and tower. Featuring four faces and a 683-pound pendulum, the clock’s 13.7-foot-long minute hands travel the equivalent of 118 miles per year. Twenty-eight 85-watt energy efficient light bulbs now keep each of Big Ben’s clock dials shining bright each night. A Latin inscription sits beneath each face: “Domine Salvam fac Reginam nostrum Victoriam primam,” which means “O Lord, save our Queen Victoria the First.” 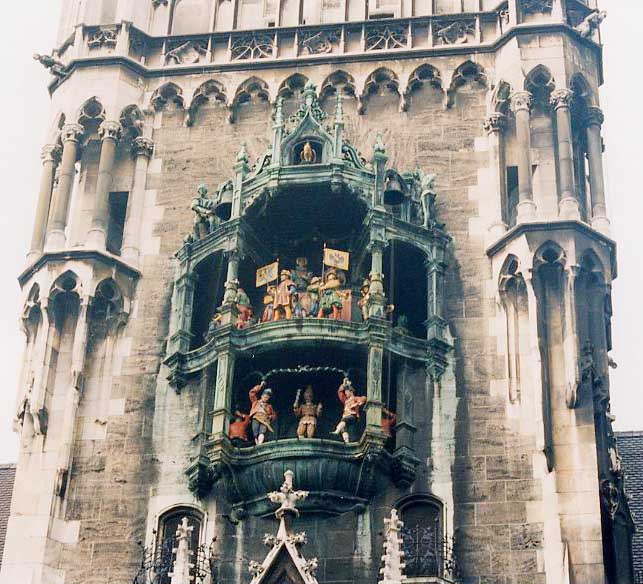 Another untraditional timepiece, Munich’s Glockenspiel only truly marks the time twice – or three times during the spring and summer – per day. But when this structure announces the time, it does so in grand fashion. The chiming clock has 43 bells and is situated in Marienplatz square in the tower of the Neues Rathaus. Originally finished in 1907, it chimes at 11:00 a.m. and noon each day (and at 5:00 p.m. between March and October). When it goes off, life-sized figurines act out various events from Munich’s history, such as a dance from the year of the plague and the wedding of Duke Wilhelm V to Renata of Lorraine. Each show runs for about 15 minutes and finishes with a golden bird emerging at the top of the structure and chirping three times. Now, that’s how the passing of time should be honored. – KahleejNews