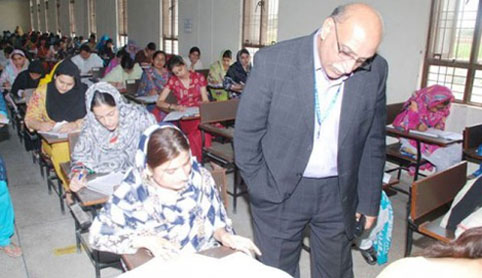 ISLAMABAD: The University of Punjab always gives directions for creating friendly and cooperative environment for students in the examination hall so that they can come up with their best of the display on the paper, but all such directions and instructions sublimated into the air when an inspector deputed from the University of Punjab entered the examination hall and created havoc and terrible situation in one of the designated centers for the examination of B.Ed. at Islamabad Model College For Boys, F-10/4, Wednesday.

Abdullah, one of the candidates said, “while we were busy solving our papers, we suddenly heard the inspector shouting at the centre superintendent for the reasons better known to him. He was so harsh, loud and unmindful that he did not care what mental agony and anxiety he had caused to us, who were, otherwise in a peaceful environment, doing our job’.

According to the candidates, the superintendent and the invigilators on the whole are throughout cooperative and friendly. But this horrible guy caused such disturbance that all the girls sitting in the hall turned dumbfound for quite a time. Two or three girls got so terrified that they wanted to leave the hall without fully attempting their papers. One of the girls was so shocked at the exchange of abusive language between the inspector and the invigilator that she went unconscious. Thanks to the timely help and first aid from one of the invigilators that she was brought back to the consciousness.

Fatima who was the most tortured candidate said, “I could not reassemble my nerves even after a good span of time and my attempt in that paper was pitiably poor although I was well prepared for that particular paper. I consider that merciless inspector the sole reason for my poor attempt.”

Another candidate named Abida went a step ahead in her protest saying, “Whatever the problem these people had, they should have tackled it sensibly and better yet they should have left the hall and played free style wrestling somewhere out in the college ground.” But it should be noted that Abida gave credit to the centre superintendent for maintaining overall good environment in the hall except this unfortunate incident.

Examinations have always been a daunting activity in the total process of one’s academic life. One likes or not one has to through such tedious and nerve aching episode. These are the times, when every progressive nation and its institutions are trying to make the exams candidate friendly arena where they should display their knowledge, and talent. Unfortunately, in Pakistan, despite all tall slogans, and cogent discourses extended on this particular issue, the situation and the atmosphere in the examination halls remains the same i.e. non-conducive. This miserable situation becomes a nightmare and horrific experience for the candidates when the people authorized to conduct them shortsighted professionals.

It is high time for the University of Punjab that it takes account of such inopportune incidents, and removes from its list all such inspectors that do not bear polite, considerate and pleasant personalities. The individuals that turn out to be unmindful and insensitive to their sensitive positions should not be trusted with such duties. Moreover the university should adopt a futuristic and forward looking approach and make the officials designated with the duties of inspection go through trainings and workshops in order to sensitise them as to the significance of their job. The candidates hoped that concerned quarters will take serious notice of this prevalent situation and make the exams a sufferable activity. – Nation