DAP offtake up 170% YoY; Urea sales stable: During the month of October, in line with our expectation, offtake of DAP jumped 170% YoY to 371k tons, primarily on the back of accumulation for the ongoing Rabi sowing season. However, Urea sales remained stable at the level of 427k tons.

Positive stance – FFBL to benefit the most! We anticipate full year CY10 Urea and DAP offtake at the level of 5.9mn tons (-9% YoY) and 1.5mn tons (-13% YoY) respectively, implying 4Q Urea/DAP offtake of 1,689k tons/ 798k tons correspondingly down 8%/ up 34% YoY. Consequently, we anticipate FFBL to be the main beneficiary during 4Q.

October witnessed significant DAP offtake, up 170% YoY to 371k tons during the month, as farmers stepped up purchases for the Rabi season. However, for Urea, offtake remained stable at the level of 427k tons. During the 10-month period, both Urea’s and DAP’s cumulative sales registered negative growth of 9% YoY to 4,618k tons and 15% YoY to 1,047k tons respectively, primarily attributable to lower sales in anticipation of poor soil condition post flood during the previous months. 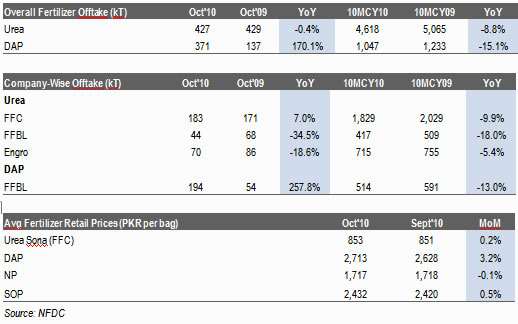 With wheat sowing season already started in Oct-Nov, overall fertilizer dispatches (both Urea and DAP) will likely post significant growth during 4QCY10 and with uncertainties regarding soil conditions gradually tapering off. We expect 4QCY10 Urea and DAP sales at 1,580k tons/ 670k tons respectively, taking CY10 offtake to 5,770k tons/ 1,345k tons, down 11%/ 20% on YoY basis. Moreover, we believe FFBL will be the main beneficiary during 4Q, being the sole manufacturer of DAP, given its phenomenal demand recovery.

Positive stance on the sector

Combined with strong demand of DAP, healthy primary margins hovering around USD200-225/ton will lead to healthy earnings growth during the last quarter for FFBL (4QCY10 EPS of FFBL estimated at PKR1.71). Moreover, with FFBL share price gaining momentum, FFC will also bear fruits with its holding of 50.9% in the scrip (4QCY10 EPS of FFC estimated at PKR4.09). Hence, we recommend accumulation at current levels with our June’11 PT for FFC and FFBL at PKR123/share and PKR39/share respectively.