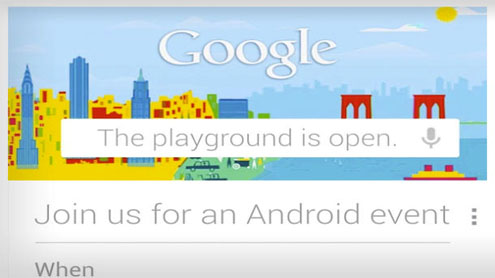 LG will produce the smartphone, while the Samsung will make a high-end tablet. Also to debut will be an upgraded version of the Nexus 7.

The search giant is set to debut the latest version of its Android operating system, known as Android 4.2, at an event scheduled for October 29 in New York. Rather than the rumored Key Lime Pie, it will be known as Android 4.2+, or an updated version of Jelly Bean, according to a person familiar with the announcement.

Google will also be showing off the first devices to run on Android 4.2, including a high-end tablet, the Nexus 10, from Samsung Electronics, and LG Electronics’s first Nexus phone, the Nexus 4, CNET has confirmed. Also shown off will be an updated version of the Nexus 7 tablet which debuted in July.

The Next Web first reported on the planned product. The event marks Google’s biggest Nexus showing, with three devices scheduled for debut at the same time. The Nexus program has long been Google’s way of showcasing the latest version of its Android operating system. It has also come with a measure of buzz for the manufacturing partner.

After the Nexus One, which was built by HTC, Google mainly partnered with Samsung, including the Galaxy Nexus. But this year, Google worked with Asus to produce the low-cost Nexus 7, which sold at $199.Alongside the low-end Nexus 7, Google will now offer a high-end Nexus 10 tablet built by Samsung, which was initially reported by CNET. The device is expected to boast a higher resolution than the third-generation iPad.

The tablet will be more in line with the pricing of its other products, including the Galaxy Tab 2 10.1 and Galaxy Note 10.1.LG, meanwhile, will get its chance to shine with the Nexus 4, which is an altered version of the Optimus G. The smartphone will have a quad-core SnapDragon processor from Qualcomm, 2 megabytes of RAM, a 1,280×768 display, 16GB of internal storage, and an 8-megapixel camera. Unlike the Optimus G, the Nexus 4 won’t be an LTE device, according to a person familiar with the announcement.

LG will get its shot to build a little buzz for its products, something it has struggled to do, particularly in the U.S. market.The upgraded version of the Nexus 7 will include a 32GB option. A second version will include a 3G cellular connection, according to The Next Web.Check back with CNET for all the details when Google holds its event next week. – CNET