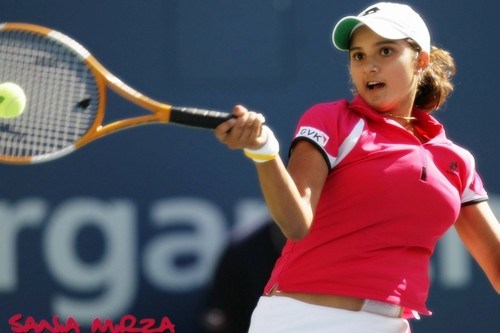 Tennis is a worldwide most famous game, it followed by millions around the globe. I am a great fan of tennis and have watched almost all the tournaments. It’s amazing to see that the girls who play tennis are so hot and sexy ! Why ? I am not able to answer.

There are many hot female tennis player around the world and lot of them have a huge fan following. Among such hottest beauties it is very tough to pick up top ten, but I try as I might. I know everyone has his/her own choices or like, but I felt that our readers should also read about some of the hottest tennis players, so I am compiling this list of Top 10 Hottest Female Tennis Players of All Time. If you have any suggestions or have something to share, please write in comments.

This lass is not only beautiful but has the best body in the history of women’s sports. She has made her mark in the fashion as well as the television industry. She is one sexy woman that really is a pro in playing tennis. Serena Jameeka Williams is an American professional tennis player born on September 26, 1981. She was declared by WTA or Women’s Tennis Association as World No. 1 in singles for five various occasions. She also won four gold medals in the Olympics for singles and in double categories.

The total Grand slam titles that she received totaled to about 30 in various tennis divisions in many occasions. She also won a career Golden Grand Slam after the 2012 Summer Olympics gold medalist. She is the first person that won Career Golden Grand Slam for both singles and doubles. She is one of the world’s best female tennis players.

The recently retired Russian hottie Elena was one of the most well mannered and sexy tennis player. She ranks no.4 in women’s tennis. She looks terrific on the court. She is definitely one hot lass. She is a blonde, tall and sexy player that plays quite magnificently in the court. She is considered as a blonde hottie with a schoolgirl charm as she ties her hair in ponytail and starts to swing her racket to gracefully hit the tennis ball. Men love to watch her, thus she was voted as one of the Top 99 Women by AskMen.com.

Elena Viatcheslavovna Dementieva had won gold medal in 2008 Olympics in Beijing, silver medal in 2000 Olympics in Sydney and many more awards in the field of tennis. She has been a champion since she was 13 years old. Her achievements in tennis are non-stop in her hometown and she had grabbed many international awards as well. She got her tennis skill from both her parents Viatcheslav and Vera who both played tennis as recreation.

Another gorgeous blonde Russian Maria, the smoking hot tennis player . She was born in Moscow and holds a highest ranking of 18. She also has been in the Swimsuit Edition of 2009. She dominates her presence in the doubles title and she is considered to be the best. Kirilenko may be one of the lesser known beautiful Russians but she is definitely a fashionable beauty. She appeared in several fashion magazines like Vogue and has also posed for Sport Illustrated. She enjoys media attenton and loves being the center of all action.

There is another hottie who plays tennis. The 24 yr old French professional tennis player, Tatiana is popular for her explosive forehand. She has done photoshoots for Sports Illustrated Magazine. She has a charismatic personality. She doesn’t play tennis anymore due to her lower back injuries.

She won the 2001 French Open mixed doubles and reached 2006 US Open where she was beaten. She is hailed by Sportarium as the No. 1 sexiest female tennis player in 2012. She appeared in magazines such as Sports Illustrated Swinsuit Edition in 2009 where the picture she had with Daniela Hantuchova and Maria Kirilenko is entitled Volley of the Dolls.

Super hot, sensational & a intelligent tennis players. She knows her shots well. The hot & sexy Indian beauty, Sania Mirza is all of 24 yrs and its a pleasure to watch her glamorous beauty when she play. She married Pakistani cricketer Shoaib Malik. Sania is famous with her forehand ground strokes that are full of strength and power. She is No. 1 in many Indian tennis plays both for single and double categories. She has surpassed US$1 Million career earnings as a tennis player making her the highest paid female tennis player ever in India.

Sania Mirza is the first Indian to win WTA Tour title and also she won the 2009 Australian Open for mixed doubles. She had won Grand Slam tournament and has cracked the Top 50 rankings of WTA. Many are curious of her being exposed physical outfits despite her being a Muslim by birth. In fact, this caused issues in their religion. However, this did not stop her from winning titles in tennis. She continues to reign in beauty and in the game. She ranked in #77 in the AskMen.com’s Top 99 Women for 2012.

This bombshell from Czechoslovakia is a rising star in tennis. Gael Monfils a french tennis player is quite lucky to get this girl around him. She currently hold No.16 rank in the singles titles. She achieved the world junior 3 in May 2005. She achieved the rank of 12 in 2009. Her biggest breakthroughs started when she joined 2009 French Open and reached the semi-finals.

Ashley Harkleroad is an American tennis players. She is the first WTA player that has a nude pose at the famous Playboy American men magazine. She is famous in such a way that she matches her tennis with what she is wearing. She has appealing looks, oozing with sex appeal that men love to watch her play tennis. She was hailed as “American Ana” after her appearance at the US Open in 2001 wearing a scandalous outfit and all.

Her being young and sexy did not stop her from winning many plays in tennis. She has bunch of young American fans in her career as a tennis players as well as a sexy woman. She is ranked #77 in the AskMen.com’s Top 99 Women of 2012. She is married to her coach Chuck Adams. Her prize moneys exceeds one million dollars.

When Anna Kournikova retired a different Ana quickly filled her shoes and has more than kept men interested in women’s tennis. Another six footer after Maria Sharapova, a Serbian professional tennis players Ana Ivanovic, previously ranked as No. 1 in the Women’s Tennis Association (WTA). Ana has graced many a magazine but has also dated some of sports most eligible bachelors.

She has a aggressive style of play.She currently holds a ranking of No.156 in the doubles title. She is a former world number one who has one Grand Slam, Roland Garros, to her name. Since peaking in 2008 Ivanovic has struggled to regain her form and has had difficulty, not only with her serve, but also the mental side of the game. She looks sweet and adorable, it doesn’t matter whether she plays well or not .

No tennis hot list is complete without the girl who isn’t known particularly well for her tennis but more for her beauty. She used to fill stadiums with eager spectators who cheered for her and loved her despite of her lack of game. That glamorous beauty is no other then world’s best known hottest woman, retired Russian tennis player Anna Sergeyevna Kournikova. She is one of the most searched women in the internet. Millions of male fans like her unique and amazing look. She is a definite example of being a star not due to her skill in playing tennis but just because of her being sexy. As per fans of Anna, she looks like a goddess in her many tennis outfit making admirers be stunned with her grace in the court.

Anna became quite popular after doing a music video with Enrique. She was voted as FHM’s Sexiest Woman in the World in the year 2002. Though she had a short span of tennis career she has a huge fan following afterall she is cute. Kournikova has spent her years off the circuit making headlines for her relationship with singer Enrique Iglesias and for her modeling efforts around the globe. Anna’s long blonde hair and bikini body is so famous that she recently appeared on an episode of the Biggest Loser in America as well as gracing covers of endless magazines. Kournikova is one of the most photographed women in tennis. -wonderslist

No doubt the at top of the hottest & sexiest tennis players is no other ten Russian beautiful girl Maria Sharapova. She currently hold rank No. 3 in singles titles. She also has major modelling assignments which also includes Sports Illustrated Swimsuit Issue. She is sexy and glamorous which makes her the hottest tennis player on our list. She is most famous female tennis player of all time, especially among the men. with immense fame, beauty, wealth and glamorous lifestyle, she is loved by men all over the world. She ranked No. 1 in many online lists of top 10 Hottest Tennis Players.

Maria Sharapova is well known for her modeling and on court fashion and prides herself on always looking her best. She has been featured in a number of modeling assignments, including a feature in the Sports Illustrated Swimsuit Issue. She has been featured in many advertisements, including for Nike, Prince, and Canon, and is the face of several fashion houses, most notably Cole Haan.

Sharapova was the most searched-for athlete on Yahoo! in 2005 and 2008. Since February 2007, she has been a United Nations Development Programme Goodwill Ambassador, concerned specifically with the Chernobyl Recovery and Development Programme. In June 2011, she was named one of the “30 Legends of Women’s Tennis: Past, Present and Future” by Time, and in March 2012 was named one of the “100 Greatest of All Time” by Tennis Channel. Did you enjoy our list of Top 10 Hottest Female Tennis Players? Do let us know who are your favorite female tennis players in terms of beauty, hotness and game. -wonderslist

Gullu Butt beaten by lawyers & angry people when he appeared in Court.