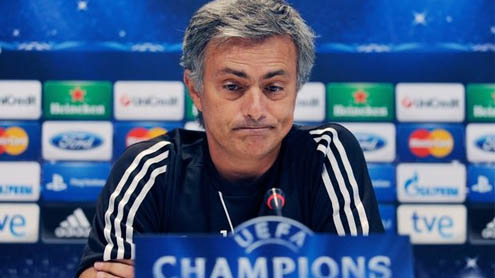 LONDON: Real Madrid manager Jose Mourinho ran the rule over Manchester United on Sunday before declaring that Wednesday’s Champions League clash between the sides was “the match the world is waiting for”.

The last 16 first-leg game at the Bernabeu pits old adversaries Mourinho and Alex Ferguson head to head and Real forward Cristiano Ronaldo faces his former club.The plot-lines are rich and Mourinho, who once famously danced a jig of joy along the Old Trafford touchline when his Porto side got the better of United, seemed genuinely excited to be part of the showpiece occasion.”We have to feel very privileged to play this match,” Mourinho, who sat in the directors’ box as United opened up a 12-point lead in the Premier League with victory over Everton, told MUTV.

“People think we’re under pressure because one of the big teams will soon be out of the biggest competition.”But Real Madrid and Manchester United staff, as well as the players, feel privileged. It’s the kind of match you want to play and we have to prepare as best we can.”It’s such a big match,” added the Portuguese. “Everybody wants to play. Nobody will be tired. It’s a match the world is waiting for. They are not waiting for other matches in the Champions League. So I hope we can give the world of football what they’re waiting for.”

Ferguson has rarely got the better of Mourinho, winning just two of the matches when they have sat in opposing dugouts, but clearly has plenty of time for the former Chelsea manager.”I had a chat with Jose before the game, he was in good form,” Ferguson said. “We’re both looking forward to the game on Wednesday. It’ll be terrific.” – YhaooNews