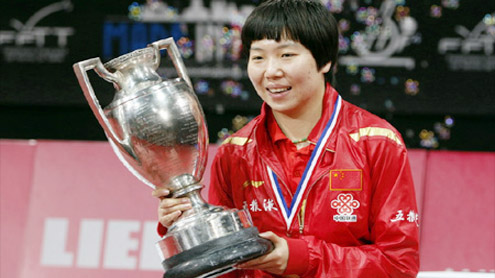 PARIS: China’s Li Xiaoxia claimed her maiden world championship title in Paris on Sunday to complete a career grand slam after defeating compatriot Liu Shiwen in an enthralling final. Runner-up to Ding Ning in 2011 and four years earlier to Guo Yue, Li went one step further in the French capital with an 11-8, 4-11, 11-7, 12-10, 6-11, 13-11 victory at the Bercy Arena.

Liu appeared set to extend the match to a deciding game after saving two match points in the sixth game but Li would not be deterred, clinching the title at the third time of asking as Liu fired long. The triumph saw Li achieve a table tennis grand slam with the world championship crown adding to the World Cup she won in 2008 and the Olympic title she picked up last August in London. “I won because of my really strong fighting spirit. Thanks to it I can control myself and calm down as well as play stronger when I need to,” said the 25-year-old Li. “I learned a lot from the London experience,” she added, referring to her win over top-ranked Ding Ning in the 2012 Olympic final. Li also paid special tribute to her coach Li Sun, saying: “He gave me a lot of confidence, not just technically but also mentally. I really appreciate his help.”

Liu, who was playing in her first final at the event after two previous semi-final appearances, was philosophical in defeat. “I think generally I played quite well. I want to congratulate Li Xiaoxia. She played better than me in several sets and I will continue to try and improve. Only one player can be champion. There is always a winner and a loser,” added the beaten Liu. Bronze medals were awarded to losing semi-finalists Ding and teenager Zhu Yuling.

“I’m pretty happy with my performance today. I think I’m in my best shape at the moment; I think Timo is as well and I was well prepared for the match,” Ma told the ITTF.com. “The crowd was for Timo but I’m a professional player, it’s not new, I’m used it and there were some Chinese supporters in the crowd on my side.” The 2009 champion Wang Hao awaits Ma in the last four after the third seed edged past Yan An 8-11, 11-9, 11-6, 12-14, 11-8, 11-2 in an all-Chinese affair. Austria’s Werner Schlager was the last man outside of China to triumph in the singles event when he beat South Korea’s Joo Se-Hyuk for gold here in 2003. – DailyTimes