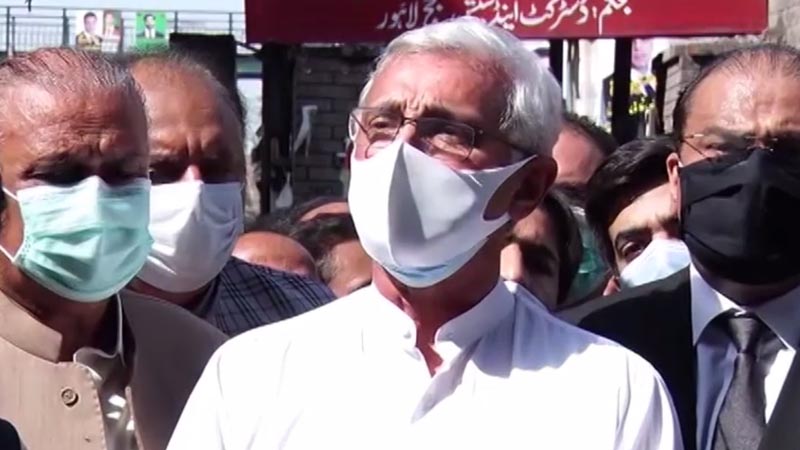 It is a question many in PTI are whispering ever since Jahangir Khan Tareen began to flex his political biceps. The man may be disqualified but he is clearly not defanged. The ruling party is faced with yet another challenge it could have done without.

The backstory: JKT helps Imran Khan stitch together PTI, electable by electable, and propels the party into power. He is seen as the most powerful man in the party after the chairman. Tipped to become the chief minister of Punjab once PTI wins the 2018 elections, JKT falls afoul of fate, and in true Shakespearian manner, is politically slain by the judicial sword on the eve of his greatest triumph.

Yet, he lives. In power, the new prime minister keeps him close. But then in Act 2, Scene 2 of this political play, JKT finds himself blamed for manipulating the sugar prices according to a government report. He is banished from Camelot, hurled outside the iron gates and stripped of all official munificence. He jets off across the oceans to nurse his wounds while entombing himself in total silence.

A few months later, he journeys back home with some assurance that he and his chairman will make nice. Not so, as it turns out. He is slapped with FIRs and is forced, along with his son, to get bail from the courts. That is where a curious thing happens. On the second day of his appearance in court, he is accompanied by some PTI parliamentarians who lend vocal support to him. A few days later, JKT holds a dinner at his home which is attended by nearly 30 PTI MPAs and MNAs. The game is on.

Though, perhaps not fully. This game may revolve around JKT but it is fuelled by these 30 PTI parliamentarians and their intentions. Weigh the significance: there are nine MNAs among these 30 and the rest members of the Punjab Assembly. If these numbers were to break away from the party, theoretically, PTI could lose its majority in the National and Punjab assemblies.

This is not about to happen, as per those who are involved in this game. JKT says the FIRs against him are politically motivated but he has been careful not to point the finger at his old friend and party chairman. His posse of 30 however has sharpened its tongue, and demanded a meeting with the prime minister to persuade him that JKT is being unfairly targeted. At first the government took a tough line. Now the meeting is expected to take place in the next few days.

So what exactly is going on?

Plenty, as it so happens. The FIA is on JKT’s case and SAPM Barrister Shehzad Akbar is supervising the investigation at the exclusion of Sheikh Rashid, who as the federal interior minister is on paper the big boss of FIA. But the JKT affair is now more political than the FIA would like to pretend. According to insiders who reside deep inside the Red Zone, some powerful people have jumped in to ‘manage’ the affair before it does further damage to the PTI. JKT had planned an iftar-dinner for the 30 parliamentarians and this was supposed to have been a show of force, but the dinner has now been postponed after powerful people indicated that the prime minister would be willing to meet the JKT posse.

There was in fact a reason for JKT to return from abroad. Sources believe some assurances were extended to him. In fact, one PTI senior member says JKT even helped garner votes for Hafeez Shaikh in the Senate elections. But then — as is the wont in high stakes political games — a chasm appeared from nowhere. A Red Zone insider says that some officials high up in the federal government echelons accused JKT of supporting Yousuf Raza Gilani. As evidence, they alleged that JKT’s famed jet — that was used extensively during the PTI years in opposition — had been utilised to ferry around Gilani. This stung.

However, one senior parliamentarian who is now seen accompanying JKT to his court hearing rubbishes this allegation. He says it is a case of mistaken identity. How so? According to him, Gilani did use a jet for his campaign, but it was not JKT’s jet but the one that belongs to his brother-in-law and PPP leader Makhdoom Ahmad Mehmood.

The stuff that high stakes games are made of.

Which is why unease exists in the ruling party over the JKT affair. A few senior people are urging the leadership to solve the issue before it becomes a political complication — or 30 complications, to be precise. Some feeble attempts have been made to lower the temperature. According to sources in the Punjab government, Chief Minister Usman Buzdar has held meetings with a few among the JKT posse and offered full cooperation. A large number of DCOs and DPOs were also instructed to contact these parliamentarians and assure them of their service. Many of these officers invited these parliamentarians to iftar as a gesture of goodwill.

But goodwill only goes so far in the high stakes game that is underway between JKT and his powerful detractors inside the Red Zone. One politician who has known both JKT and PM Imran Khan for a very long time believes the prospects of JKT’s return and rehabilitation within the PTI are next to none. He says JKT would make a mistake if he blundered back into the party fold, even though he retains support within the party elite. “Tareen has to take sides now because he does not have much time,” says this seasoned politician from Punjab who has a ringside view to this great game.

Not true, according to many in the posse. They believe they can persuade the PM of the fairness of their demands when they meet him shortly. These demands, or requests, will be very specific in nature. Goodwill is good, but commitments are better.

What if firm commitments are not forthcoming? Here’s where things get a bit complicated. The 30 are standing with JKT now, but for how long? And to what end? The senior politician from Punjab, who has seen the ebb and flow of such situations in yesteryear, believes JKT has a window of three or four weeks and not more. Whatever he has to do needs to be done within this time frame otherwise the situation could slip out of hands. “Tareen needs an outcome,” he says, “otherwise his support could slip away.”

Strangely enough, some among the JKT supporters agree. They argue — quietly of course — that their window will remain open till the end of May. Really? That specific? Yes, they say. That’s when the budget will be presented — both in Islamabad and Lahore.

Numbers will count then. Each single number. And each single member. This means pressure on both sides within this intra-PTI great game. The PML-N is watching like a hawk in Punjab. No, they have not had any contact with JKT or his posse, and yes, they are very interested in the shifting numbers in this game. But PML-N insiders believe the numbers — including the JKT ones — will not scatter as long as the establishment is not interested in rocking the Buzdar boat. If removing Buzdar means letting the PML-N back into power in Punjab, regardless of the JKT affair, that is not on the horizon. Yet.

What will JKT do? The answer may need to wait a while, but what is fairly clear now is that he commands a ‘forward bloc’ that can rattle PTI both in Islamabad and Lahore. He may be disqualified but he is surely not defanged.