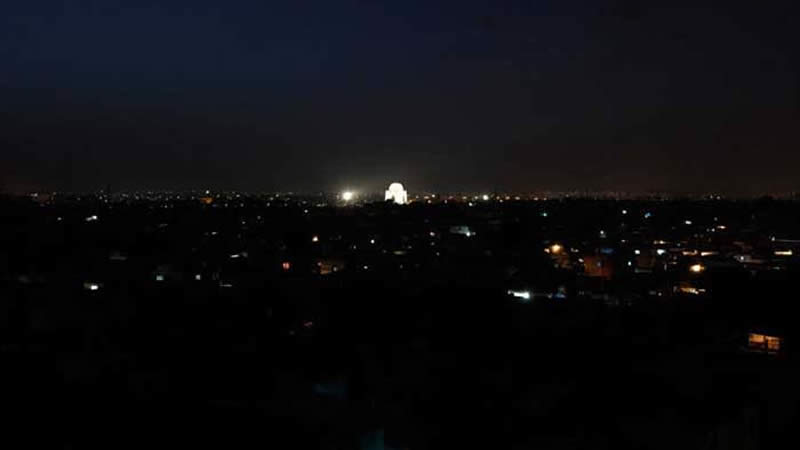 The countrywide power outage in Pakistan Saturday night was because of improper maintenance of transmission lines (TLs) and a failure of the safeguard system against load at the Guddu power station.

It became worse because there were no spinning reserves, top officials from the power sector were quoted as saying by The News.

But Federal Minister for Energy Omar Ayub Khan says he is “on his toes” to find the cause of the major breakdown and will make it public once he finds out.

He had said transmission lines and insulators were being looked after properly and the safeguard system against the load did not collapse.

It was Guddu plant, which went out of the system owing to which frequency instantly dropped to zero from 50, but it is yet to be known in which circuit the fault appeared, he had said.

Ayub had said Sunday night that electricity had been restored in 80% of the country.

An official, in background interview, said Guddu power house was placed in mid country where, during the winter season, a dense fog was always found, and this was the area from where the fault originated causing the power breakdown.

In 2013, 2015 and 2017, electrical blackouts gripped the country mainly because of negligence in maintenance of transmission lines and washing of insulators.

This time, the National Transmission & Dispatch Company (NTDC) had not properly maintained the transmission system and washed the insulators, resulting in tripping of the high transmission line, the official said.

“Had the protection system against the load worked properly, the Guddu power plant would not have become dysfunctional,” the expert said.

However, officials having technical knowledge about the power sector said Pakistan is rich in electricity generation capacity by over 36000-MW, but the government has failed to maintain spinning reserves.

They say spinning reserves play an important role in preventing power breakdowns when a powerhouse becomes dysfunctional for any reason.

In developed economies, when a power plant goes out of the system, the spinning reserves come into action and maintain the system without any jerk.

“Spinning reserve is the most important contingency reserve because the generators that provide it power are already running (spinning), synchronised to the grid and can, therefore, respond immediately, either manually or automatically, to the changes in system frequency,” an expert explained.

“The government should have arranged the spinning reserves knowing the fact the country is in surplus in electricity generation,” the expert said.
Committee formed to investigate blackout

The NTDC has made a four-member inquiry committee to investigate the countrywide power outage.

A notification by the NTDC read that Mehmood will be the convener and the three others its members.

The committee will investigate the reasons/facts leading to the collapse of the power system. It would also hold any officer/official responsible for negligence in discharge of duty.

The committee has been tasked with suggesting prevention measures to keep such incidents from happening again.

It will submit its report in seven days.