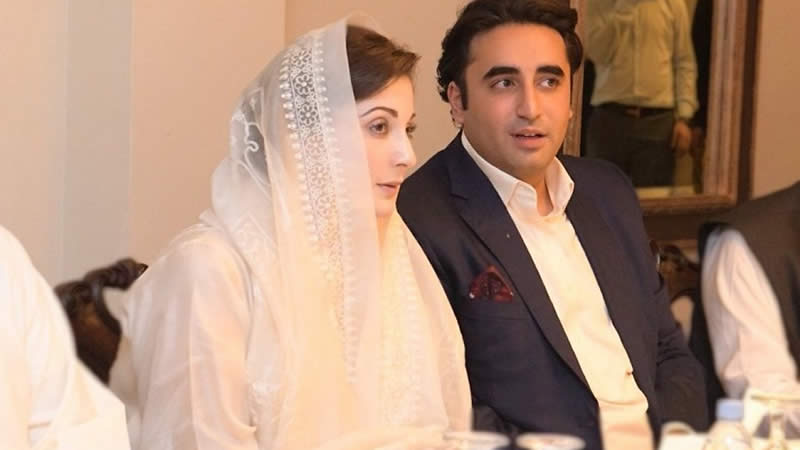 The Opposition has repudiated the government’s plan to hold Senate elections early this time saying they will not allow anyone to repeat the “unconstitutional tactics” for the polls in the upper house as were “employed” during the “2018 general elections”.

According to a statement issued by the Bilawal House on Wednesday, PPP Chairperson Bilawal Bhutto Zardari spoke with PML-N Vice President Maryam Nawaz and discussed the political situation arising after the PDM public meetings.

Deliberating on the government’s move to hold the Senate elections early, both the leaders stated that they will not permit anyone to again use the “unconstitutional tactics” in the upper house polls as was employed during the 2018 general elections.

As the opposition threatens to hand in resignations from the federal and provincial legislatures, the ruling party has started weighing the option of holding the Senate polls – scheduled for March – in February in order to win control of the upper house by snatching majority from the PML-N.

Analysts believe the move to hold the Senate elections earlier is expected to disrupt the PDM plan of forcing the government to resign and hold fresh general elections before March 2021.

JUI-F leader Abdul Ghafoor Haideri disapproved the ruling party’s suggested plan of holding the Senate elections early questioning what was the motive behind the move.

“Holding of early [Senate] elections in my opinion is unconstitutional.”

Haideri claimed that the government was “perplexed” and had been “shaken” by the PDM’s Lahore public meeting.

He cast off the option of holding a dialogue with the incumbent regime saying it was only a “show piece”.

The JUI-F leader stressed that parliament was the supreme forum, which was authorised to make any amendments in the Constitution and law.

He said the PDM leadership will further discuss the issue of Senate polls.

PPP lawmaker Raza Rabbani also expressed his reservations on the issue of Senate elections saying the federal cabinet had made an “illegal” move and that it was the job of the Election Commission of Pakistan to decide about the holding of polls in the upper house.

The former senate chairman made these remarks while addressing a news conference in Karachi.

“The term of the current senators will end on March 11, 2020, at noon,” he said adding “The decisions of the Council of Common Interests (CCI) are being made by the Cabinet.”

Speaking about the process of conducting Senate elections through an open vote instead of secret balloting, the PPP legislator maintained that the ruling party did not have the power to get amendments passed by the House.

“It is a fact that money influences Senate elections but this [practice] can be abolished.”

Rabbani stressed that the mode of conducting the elections cannot be changed, saying Pakistan was not a “banana republic.”

“No one can violate the Constitution of Pakistan. Under Article 186, the Supreme Court can only give its opinion.”

The former senator further noted that the provinces had not been given anything under the National Finance Commission (NFC) for the past 12 years.

“The government is talking about monitoring the NFC money in the provinces,” he said, warning “the federal government should not tamper with the NFC otherwise provinces will not collect taxes.”