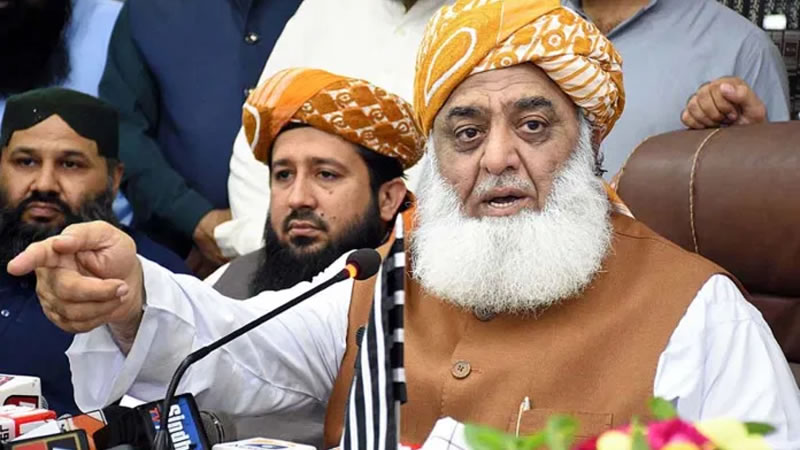 The Pakistan Democratic Movement, an 11-party alliance of opposition parties, on Wednesday said the next Senate elections would be considered “fake” if they were conducted through the existing national and provincial assemblies.

The steering committee of the alliance has also decided that the joint opposition would stage its anti-government long march on Islamabad in the last week of January.

“We consider breaking the electoral college a democratic process and are preparing a strategy for that. We are also consulting constitutional experts,” JUI-F chief Maulana Fazlur Rehman, the head of the alliance, told the media in Islamabad accompanied by PPP Chairman Bilawal Bhutto Zardari and PML-N Vice President Maryam Nawaz.

He reiterated that the PTI government could not be considered a “constitutional or democratic” regime.

“Today, there is no democracy in the country, here the stooge of the dictatorship has buried democracy,” he added.

The Maulana’s remarks came a day after the PDM announced that all parliamentarians belonging to its constituent parties would submit their resignations from the national and provincial assemblies to their respective party chiefs by December 31.

Prime Minister Imran Khan in response said the government will hold by-elections on the vacated seat in case the opposition resigned from the assemblies en masse.

Elections on half of the 104-seat House are scheduled to be held on March 3 next year, as 52 senators will retire next month upon completion of their six-year term in the Senate.

With at least six of its new lawmakers expected to get elected to the upper house of parliament, the Pakistan Tehreek-e-Insaf is likely to become the third largest political party in terms of its strength in the Senate.

The PDM also alleged that the government was trying to prevent it from holding its rally at Minar-e-Pakistan in Lahore by flooding its ground with water.

“December 13 will be a historic day for Lahore and the opposition alliance will hold the rally at any cost even if the Punjab government turns it [venue] into a dam,” the JUI-F chief said.

“If our path is blocked, we will make a new path, but the government will not be able to stop the flood of people,” he added.

Speaking on the occasion, Bilawal said the PPP had fought in every dictatorial era. “The PPP’s politics started on the streets and we are fully prepared to send the rulers home.”

All parties in the PDM are on “one page and one stage”, he said, adding that the alliance will use “all parliamentary and democratic options” to send the PTI government and their facilitators home.

Amid reports that the PPP is reluctant to tender their resignations, Bilawal clarified that the resignations from assemblies were also part of the process.

Maryam said the December 13 rally would be held at Minar-e-Pakistan and the venue would not be changed under any circumstances.

Separately, PDM spokesperson Mian Iftikhar Hussain said the alliance’s steering committee had decided to hold the alliance’s long to march to Islamabad in the last week of January and a schedule for a wheel-jam strike had also been prepared. He added that further details would be announced at the PDM’s Lahore rally.