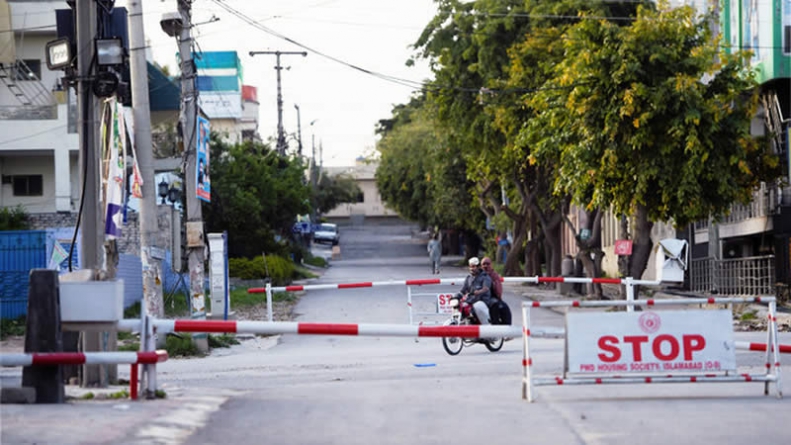 The enforcement of smart lockdown has begun to bear fruit as it was revealed on Wednesday that the number of coronavirus cases reduced by 90 per cent in an area of the federal capital which was sealed on March 13.

“Around 100 cases were being reported daily from Sector G-9, but after enforcement of smart lockdown the number of cases has reduced to 8-9 per day. It is nothing but benefit of the lockdown as the movement of people has been minimised,” Islamabad Deputy Commissioner Hamza Shafqat told the media.

He said no one was being allowed to unnecessarily go inside or outside the area under lockdown and even movement was being discouraged to reduce the chances of human to human transmission of the deadly virus.

Pakistan Medical Association secretary general Dr Qaiser Sajjad, while talking to Dawn, insisted that recommendations of the World Health Organisation (WHO) should be implemented to minimise the spread of Covid-18.

It is worth mentioning that the WHO has suggested intermittent lockdown [15 days off and 15 days on] to stop the transmission of the virus.

Dr Sajjad said that at least the whole cities should be locked to contain the transmission of the viral disease, otherwise the country night never be able to get rid of it. “Virus cannot be eradicated by enforcement of lockdowns in some areas of the cities as people will find ways to cross the areas and reach the places of work and may violate restrictions for other reasons. If the whole city is locked, people will have no reason to move out of the area under lockdown,” he explained.

He said that some countries like New Zealand had got rid of the virus by imposing lockdown and Pakistan should also focus on it.

“Moreover, heavy fines should be imposed on violators as majority of people either don’t wear masks or they just hang them in the neck or keep them on the chin. Rulers should hold meeting with a one-point agenda — controlling the disease. There should be uniformity in policies of the federal and provincial governments and stance of opposition parties should also be the same,” he suggested.

Dr Sajjad said it was unfortunate that the brand names of medicines were being used in the media as a treatment of the disease due to which these had disappeared from the market. “Even government personalities are using the brand names of medicines, which is condemnable. I suggest that generic name (formula name) should be used to avoid shortage of medicines. Unfortunately, people have started storing the medicines, oxygen cylinders, etc, at their houses unnecessarily due to which disserving patients don’t get the medicines,” he added.

According to a statement issued by the National Command and Operation Centre, more than 9,827 violations of health guidelines/instructions were observed across the country during the last 24 hours due to which over 963 markets/shops and 18 industries were sealed and 1,186 vehicles impounded, besides imposition of fines.

Under the tracing, testing and quarantine (TTQ) strategy, 904 lockdowns were imposed in Punjab, 26 in Sindh, 572 in Khyber Pakhtunkhwa, 29 in Azad Kashmir, 10 in Islamabad and five in Gilgit-Baltistan.

The WHO has welcomed the initial clinical trial results from the United Kingdom, which show dexamethasone, a corticosteroid, can be lifesaving for patients who are critically ill with Covid-19. For patients on ventilators, the treatment redu­ces mortality by about one-third, and for patients requiring only oxygen, mortality was cut by about one-fifth, according to the preliminary findings shared with the WHO.