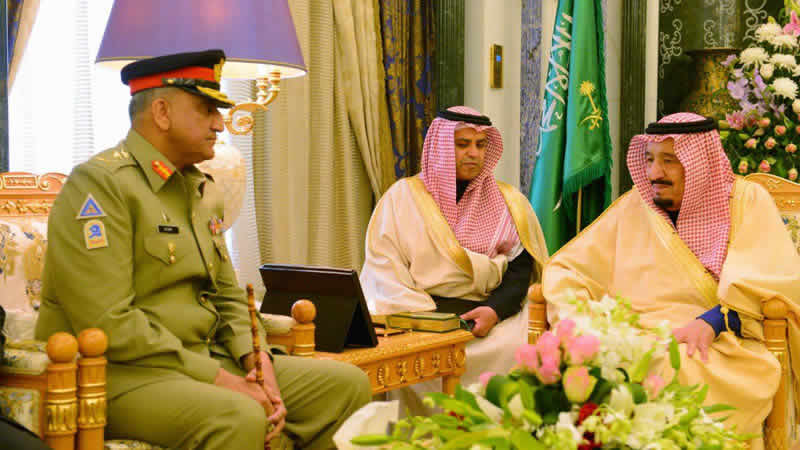 The COAS is on a three-day official visit to the Kingdom of Saudi Arabia. According to the Inter-Services Public Relations (ISPR), the Saudi king and the COAS agreed that both the countries share great history of cordial relations and deep spirit of brotherhood which has transformed into an enduring partnership.

It was also acknowledged that both Pakistan and the Kingdom of Saudi Arabia are vital players in regional stability, “with significant responsibility towards the entire Muslim ummah”. Both leaders re-emphasised on the need to continue working to eliminate the menace of terrorism and reinforce the mechanism to roll back extremism with even greater vigour. The crown prince and foreign minister were also present in the meeting. The chief of army staff also held meetings with Saudi Deputy Crown Prince and Defence Minister Muhammad bin Salman to discuss matters related to mutual interests and bilateral security cooperation. The defence minster reassured the Pakistan Army chief that the kingdom supports peace and stability in Pakistan in every way. The chief of army staff reiterated Pakistan’s commitment to the security and protection of the Holy Mosques and also the territorial integrity of the kingdom.

During a meeting with the Saudi defence minister in January 2016, former COAS Gen (r) Raheel Sharif had also reasserted that any threat to Saudi Arabia’s territorial integrity would evoke a strong response from Pakistan. Raheel had said that Pakistan holds its defence ties with Saudi Arabia in highest esteem. He had said further Pakistan enjoys close and brotherly relations with Saudi Arabia and other Gulf Cooperation Council countries and attaches great importance to their security. The Saudi defence minister had said the kingdom attaches great importance to Pakistan and its armed forces and appreciates their successes in the fight against terrorism and efforts for regional stability. He had also reaffirmed Saudi Arabia’s full support to Pakistan’s position on all matters. Later, General Qamar Javed Bajwa met Chief of General Staff of Saudi Forces General Abdul Rehman bin Saleh Al Bunyan to discuss military to military relations, defence cooperation and regional security situation.

Both leaders agreed to boost military cooperation and collaboration. Prime Minister Nawaz Sharif has recently appointed General Qamar Javed Bajwa as the chief of army staff. The general has extensive experience of handling affairs in Kashmir and the Northern Areas of the country. As a major general, he led the Force Command Northern Areas. He also served in the 10 Corps as lieutenant colonel, where he was GSO. Despite his extensive involvement with Kashmir and Northern Areas, he is said to consider extremism and terrorism a bigger threat for the country than India. General Bajwa has served with a United Nations mission in Congo as a brigade commander alongside former Indian army chief Gen Bikram Singh, who was also there as a division commander.

Previously, he has also remained the commandant of the Infantry School in Quetta. His military colleagues say he is not attention-seeking and remains well-connected with his troops. In March, former chief of army staff General (r) Raheel Sharif also visited the Kingdom of Saudi Arabia. Raheel and Nawaz Sharif were invited by King Salman bin Abdul Aziz to witness the military exercises, as well as hold talks on the regional and bilateral issues. A number of leaders from other allied countries had also been invited to witness the ongoing military exercise and its closing ceremony. Troops from 21 countries, including Pakistan, had participated in the exercise, in the northern region of Saudi Arabia. The main aim of the exercise was to improve training to respond to threats posed by terrorists. Earlier Pakistan’s top civil and military leadership decided to expand its engagements with Saudi Arabia and will offer military training to the Saudi troops, provide it military hardware and share intelligence. -dailytimes