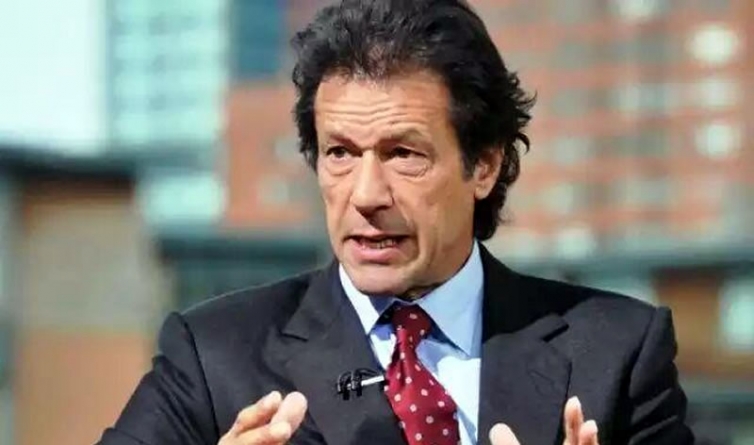 Prime Minister Nawaz Sharif will set a unique precedent on Monday (today) when he gives his formal approval to the federal budget via video link from London something his biggest critic, Imran Khan, says is a decision that could only have been taken in a “kingdom”, not a democracy.

According to the PM’s Office, the prime minister will chair back-to-back meetings of the National Economic Council (NEC) and the federal cabinet through video link from the Pakistani High Commission in London. Under the Constitution, the federal budget must first be approved by the PM-headed NEC before it is laid before the National Assembly. But speaking to representatives of the National Press Club from his Bani Gala ‘pulpit’, the head of the opposition Pakistan Tehreek-i-Insaf (PTI) posited that Finance Minister Ishaq Dar’s taking over was a living example of how things would work in a kingdom. In the same breath, Mr Khan said that the PM’s health issues had created another crisis in the country and suggested that Mr Sharif should have resigned as the leader of the house to avoid such a situation.

While the Constitution is silent in cases where the country’s chief executive becomes temporarily incapacitated due to a medical condition, questions are being raised about the prime minister’s decision to oversee the government’s day-to-day affairs from a foreign land. For me, the issue is not what the Constitution does or does not say, but how the ruling PML-N has reacted to the situation that emerged after the PM decided to undergo heart surgery in London,” remarked retired Justice Tariq Mehmood. Such behaviour, he told Dawn, was problematic and had no place in a parliamentary democracy. “Is there nobody within the PML-N other than Senator Dar  who is also a close relative of the prime minister  who can run the government? Are we living in a democracy or a personal fiefdom, where only the near-and-dear ones are trusted with power?” Unfortunately, the same was true for the other political parties; be they Bhuttos, Chaudhrys, or Hotis, he added.

He noted with irony that while a number of constitutional amendments had been passed by the current and previous governments, “nobody paid any heed to this constitutional lacuna, despite the fact that the provision to run the government through a senior minister had been part of the infamous eighth constitutional amendment”. But the PTI chief argues that the ongoing crisis was engendered solely by the prime minister’s extended absence from the country, which could also have serious repercussions for the democratic dispensation. If democracy is derailed at this point in time, the onus will be on Prime Minister Nawaz Sharif,” Mr Khan thundered, and hastened to add that if his party was in power, someone else would have been put in charge in case the PM fell ill. The PTI chief’s criticism comes on the heels of demands by former chief justice Iftikhar Mohammad Chaudhry, who surprisingly joined the ranks of those calling for the PM’s removal until his recovery. But while the opposition continues to raise a storm over the PM’s decision to run the government by remote control, the ruling party is keeping its focus on the budget and other official matters. A senior PML-N office bearer told Dawn, “Nobody can even dare to think on such lines, much less talk about putting a contingency plan in place.”

For all practical purposes, Prime Minister Nawaz Sharif is synonymous with the PML-N and the current government, the office bearer said. When asked about the background of Interior Minister Chaudhry Nisar’s and Punjab Chief Minister Shahbaz Sharif’s meeting with the army chief over the weekend, the ruling party source said: “The two must have conveyed how they intend to run the affairs of the government in the absence of the prime minister.” Another PML-N source said that on the face of it, the meeting was about sending a clear message to opposition leaders like Imran Khan, who might try to create controversy during the PM’s extended stay in London. “By meeting the army chief, the government is saying in so many words that civil and military leaders are on the same page,” he concluded.