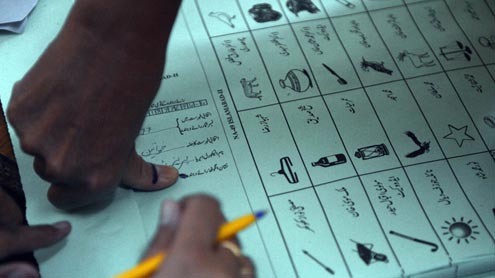 The Auditor General of Pakistan (AGP) had sought some sensitive information, including complete reports on thumb verification of voters, from the National Database and Registration Authority which later became a bone of contention between the government and Nadra, a document available with Dawn reveals.

An audit officer of the AGP had written a letter to Nadra on July 8, two months after the May 11 general elections, seeking details about financial and administrative matters of the authority as well as a report on the elections. According to the document, despite completion of an audit by the AGP, the interior ministry wanted an additional audit of Nadra through Waqar Alam, an auditor.

It is believed that the government wanted to get access to Nadra’s report on the general elections through the additional audit. However, Nadra Chairman Tariq Malik refused to provide a sensitive record of elections, including thumb impression of voters, because under the directives of election tribunals he could not share such details with any individual, government department or even the Election Commission of Pakistan. The information could only be provided to election tribunals so that they could decide the complaints about rigging in the light of Nadra’s report.

The auditor’s letter sought 17 kinds of details, including a complete report on verification of thumb impression of voters in the May elections, complaints received from MNAs, MPAs and the public about voter lists and reports prepared on the elections with regard to transparency and services provided by Nadra.

In a surprise move, the government removed Tariq Malik on the night of Dec 3 and appointed a new Nadra chairman within hours. But the Islamabad High Court struck down the government’s decision the following day and reinstated Mr Malik.

The reinstatement apparently became a matter of ego for the government which levelled a series of allegations against Mr Malik. His appointment was termed illegal and he was accused of financial indiscipline in Nadra. A day after Interior Minister Chaudhry Nisar Ali Khan had invited parliamentary leaders of all political parties in the National Assembly to a meeting for resolving the controversy over the alleged rigging in the May 11 elections, his ministry received a letter from the Nadra chief on Monday in which he rejected the allegations levelled by the minister. Mr Malik also explained why he had turned down the request for additional audit.

“I am submitting this clarification concerning the audit of Nadra to allay any misperception and assure that Nadra is maintaining financial discipline. This is evident from the finding of Audit Report of 2012-13 of the Auditor General wherein the financial position of Nadra has been described as satisfactory,” he said in the letter. He said the statutory audit of Nadra with a chartered accountants firm, as per Nadra Ordinance (section 27 (2)), had been continuing since its inception and accounts for the year 2012-13 had already been audited.

Mr Malik said Nadra’s stance concerning additional audit by the Auditor General was based on an advice by the law division that the AGP must spell out the extent and nature of audit and notify through rules as a prerequisite to audit. He said the Public Accounts Committee held on March 7 formed a high-level committee to resolve this legal issue before commencement of an audit and the case of Nadra, along with 18 other organizations, was still sub-judice in the Supreme Court.

“Nadra, therefore, clarified to the ministry of interior that it will be a deviation of PAC directive as well as advice of the law division if additional audit by the Auditor General was to be undertaken without competition of prerequisites,” he added.

He said Nadra was fully cooperating with the audit team appointed by the Auditor General and audit was in progress. The letter said Nadra apprehended that without determining the extent and scope of audit as required under Article 170 (2) of the Constitution, unlimited discretion would become available to the auditors. “This apprehension proved true when the audit team started requisitioning sensitive record pertaining to verification of election results.”

It said the audit team was also requisitioning record pertaining to 2004-05 which, before the passage of 18th Amendment, was a past and closed transaction under the then provisions of law i.e. Article 169 of the Constitution, read with Section 11(2) of the Auditor General (Functions, Powers and Terms and Conditions of Service) Ordinance, 2001 (XXIII of 2001).

“It is once again reiterated and assured that Nadra is making utmost endeavour to enforce proper financial management which has made this public sector entity profitable,” Mr Malik said. -Dawn