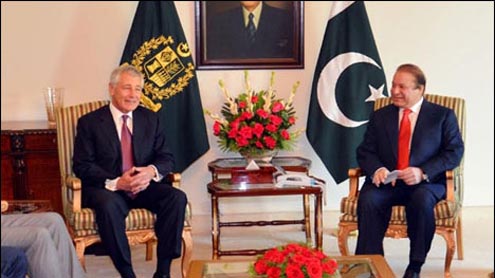 Pentagon chief Chuck Hagel during his meeting with Prime Minister Nawaz Sharif on Monday warned that US lawmakers could withhold military assistance if Islamabad failed to ensure security for the key (NATO) supply route.

“There will be those home back in Congress..who will seize upon this issue if it continues to be a concern,” a defence official, who spoke on condition of anonymity, told reporters after Hagel´s talks with the prime minister. The US provides major defence aid to Pakistan, including “coalition support funds” in which Washington reimburses Islamabad for the cost of counter-terrorism operations.

“The secretary made the point that we need to demonstrate the continued flow of goods in order to be able to continue fulfilling their reimbursements, the defence official said. Torkham gate is the main overland route used by the Americans and NATO to withdraw military hardware from Afghanistan as part of the troop pullout set to wrap up by the end of 2014.

Hagel´s trip to Pakistan was also to establish a constructive dialogue with Pakistan´s new army chief Sharif, who is expected to be at the centre of sensitive security decisions. “Issues concerning (the) defence relationship, Pak-US bilateral ties and regional stability came under discussion,” the Pakistan military said after Hagel met the army chief.-Dawn